I can’t wait to see what that rascally little gourd will be up to next!
By Lindaon December 21, 2013
0 Comments
Our Rating 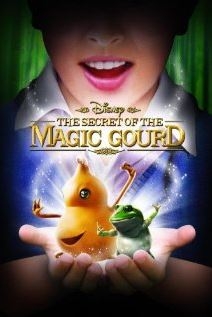 As soon as I heard the title of this film, I knew I had to see it: The Secret of the Magic Gourd. (Would this surprise anyone who knows me well? I think the answer would be no.) I mean, really… how could you NOT? How many movies have you heard of that have, well, a GOURD as the main character? (Counting on fingers…) That’s right. I didn’t know it was a genre either, but this cute family movie may have a lock on the market.

The cover of the DVD shows an earnest gourd, kinda cartoony, with an anime half-orange smile. Like all gourds, in case you didn’t know, he is a chiefly herbaceous tendril-bearing vine (a family which includes the cucumber, melon, squash, and pumpkin). But, as this is a movie, this particular gourd is doing a little jig with a frog, and they are both cupped in a boy’s hands, which are not to scale. The boy is delighted, obviously, to have this magic gourd because in his world, a magic gourd is akin to a genie in a bottle. If you are lucky enough to capture one, the magic gourd will grant you all your wishes (and maybe do a little jig for you while he’s at it).

Raymond is a boy like many others. He falls asleep in class, doesn’t study, and is more than a bit of a slacker, but has the potential to accomplish things. But really, he’d rather go fishing. At a local magical lake, Raymond snags his line on something and up pops out of the water the magic gourd himself! If you are wondering where Disney’s Corbin Bleu fits into the dubbed version of the film, he is the voice of the gourd (how’s THAT for a resume builder!). Anyway, Ray is unsurprisingly stunned to have a gourd talking to him, but he has heard about this vegetable’s wish-granting magic from his grandmother, so decides to give him a try.

As every kid hopefully learns, getting what you wish for isn’t always the best thing. The gourd takes Raymond’s wishes quite literally, getting him into all sorts of trouble—like getting the boy sucked into a dinosaur movie while his amazed classmates watch, letting him win a board game by swallowing the pieces, and granting Ray the wish of having all the toys in the toy store (who promptly march right over to Raymond’s house in a not-very-discreet way). My personal favorite was Ray wanting to be the fastest boy on the swim team, so the magic gourd attaches himself to Raymond’s chest with his four little suction-cup feet and propels him speedily through the water.

Now, take a step back and re-read that last sentence… “the magic gourd attaches himself to Raymond’s chest with his four little suction-cup feet…” I don’t blame you if you are having trouble picturing this scenario. That’s why you have to rent The Secret of the Magic Gourd! See? You can’t help it. I couldn’t help it. You are just dying to find out what that rascally little magic gourd is up to, aren’t you? And luckily, the movie is a rather sweet and painless morality tale about how kids should work hard to get what they want, because otherwise they don’t deserve it. I’d say if it takes a magic gourd to get a positive message like that across, well, more power to the gourd!

The DVD of The Secret of the Magic Gourd includes several games for the tots (more gourd fun!), a behind-the-scenes Disney featurette, a blooper reel, and a music video of “World of Wonder”. The film is originally Chinese (hence the half-orange smile on the gourd), so it includes Cantonese, Mandarin, and English language tracks… but alas, no subtitles.