Even if you have never heard the music of this highly influential (and undeniably goofy) band, you’ll be won over by Sparks’ quirky Mael brothers. 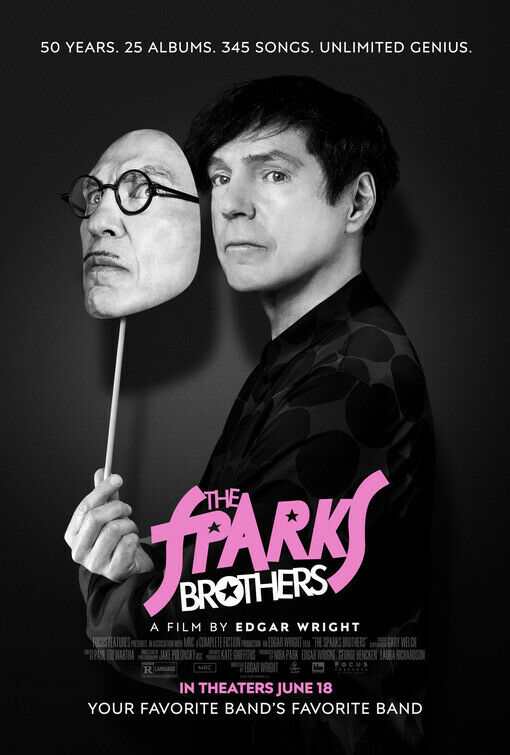 My knowledge of the band Sparks started with the new wave hits “Angst in My Pants” and “Eaten by the Monster of Love” (featured in the 1982 film Valley Girl), and ended with the pop confection “Cool Places” (a charming hit with the Go Go’s Jane Wiedlin). To get an idea of how surprisingly (to me) expansive the careers of Sparks’ Mael brothers Russel and Ron actually is, these two moments of their career show up just for a few minutes at the midpoint mark of this fun (and maybe a bit exhaustive/ing) career retrospective documentary.

Called “Your favorite band’s favorite band” in the movie’s tagline, Sparks may still have been missed on the radar even by the most righteous self-proclaimed music geeks (as exemplified by this hilarious thread on Reddit where one baffled music dude says, “There is no way a band this influential escaped not only my notice, but the notice of everyone I talk to about music. They would have come up at some point.” He is promptly smacked down in the comments by Sparks fans.)

Russell (the cutie pie) and Ron (the one with the Hitler/Chaplin mustache) Mael are indeed two brothers that grew up in LA with the influences of the Beatles, Elvis, and all the rock and roll greats of the 60s. They start a band in college, with Russell on vocals and Ron as the songwriter, but their style is a little…. odd. They even rerelease their first record with a new band name and new cover art, and it does better, but success eludes them in the LA scene. Everyone already thinks they are a European band, so they move to the UK, release the excellently-titled album Kimono My House and have a smash hit “This Town Ain’t Big Enough for the Both of Us” in 1974.  After some more hits and wild tours, their European success fades, so they return to the US.

This may have been the end of many bands, but what is so interesting is that these guys are still making music after 50 years. Their initial glam rock phase of the mid-70s morphs into electronic disco hits with their groundbreaking collaboration with Giorgio Moroder in 1979. Then they reinvent themselves for New Wave (when I first heard of them), then they just keep going, hits be damned.

The film is chock full of footage and music videos (which they gleefully created) as well as talking-head praise from famous fanboys and girls. People as varied as Todd Rundgren (their first producer), Flea, Weird Al Yankovic, Jane Wiedlin, Neil Gaiman, and members of Duran Duran and New Order all chime in, to name just a small few, and of course self-described fanboy, director Edgar Wright. But center to the narration are the brothers themselves, dryly funny, playing along with the documentary format while offering enough quirk and lies to make it more interesting.

At well over two hours, The Sparks Brothers may make a non-fan check their watch a couple times (I couldn’t help it! When they say at the start that they released 25 albums, then start to go through them one by one…), but the charms of the brothers and the sheer evolution of their sound will win over even the unfamiliar music fan.