I’m having a very hard time maintaining momentum as TIFF 2007 winds down. I find myself increasingly disinterested in my selections this year, and skipping movies rather frequently without even trying to sell my tickets in a rush line. I just can’t be bothered. Maybe it’s exhaustion, maybe it’s distraction, maybe it’s some kind of strange cosmic interference (thank goodness Mercury isn’t in retrograde at the moment). I don’t know what it is but, for the first time ever, I’m actually ready for the festival to be over before it actually is.

Having said all that, let’s get to the movies, shall we? 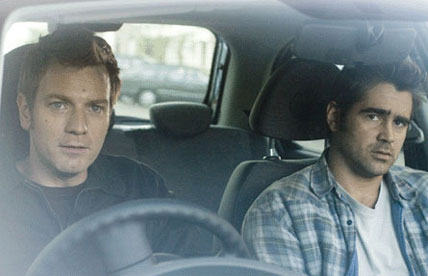 Thankfully, I was able to sleep in an extra hour (giving me a whopping SIX hours of shut-eye!) this morning because my first screening wasn’t until 11am. It was the new Woody Allen film, Cassandra’s Dream (4/8), which really should have been called Match Point 2: Match Pointier! The movie co-stars Colin Farrell and Ewan McGregor as brothers who make a rather criminal deal with their very wealthy uncle (Tom Wilkinson): he’ll give them a huge sum of money if they agree to off one of his colleagues. But the whole time I was watching I kept thinking, “I’ve seen that before.” And by “that” I mean: that location, that location, that location and that location. I thought Scarlett Johansson might wander into frame at any moment in search of Jonathan Rhys Meyers. The tone of the film was also Match Point-y, and even the main thrust of the storyline – ordinary people pushed to do bad things – felt like a retread. Disappointing.

Further to my TIFF tedium, I decided to skip my mid-afternoon movie, Run, Fat Boy, Run, because I just wanted to rest. Go home, have a snack, check my email and just sit. So I did.

My only other film today was Kari Skogland’s The Stone Angel. Since I know someone associated with the production, it would be a little weird (and biased) for me to review it, so I’ve enlisted my friend Heather (who also attended the screening) to chime in with her two cents as a guest reviewer. Heather says: 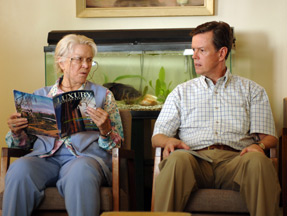 The Stone Angel (4/8), an adaptation of the Margaret Laurence novel of the same name, tells the story of Hagar Shipley (Ellen Burstyn in the present, and Christine Horne as a younger Hagar), an elderly woman who escapes from her home and her son (Dylan Baker) and daughter-in-law (Sheila McCarthy) to avoid entering a nursing home. Through flashbacks, we see the story of how she rebelled from her demanding father and married a man (Cole Hauser) who didn’t live up to her family’s social standards, and how that decision dramatically changed her life. The film boasts solid performances, most notably by the two leads, but I felt like it was at least 20 minutes too long and I didn’t feel emotionally engaged in the story (perhaps because the character of Hagar was not the most sympathetic). The Q&A afterwards included the director and most of the actors but was unfortunately rather focused on the novel as source material, which I must admit I didn’t read in high school.”

I have to agree with Heather that the post-film Q&A was sort of uninspired (I blame the moderator) – I was eager to hear what the actors had to say about their work, rather than what everybody thought about Margaret Laurence. I get it, the novel is a “Canadian treasure,” but why waste time harping on the book, the book, the book when you have Ellen Burstyn and company onstage ready to chat?

Finally, as a post-script to a previous entry, seems Eric and I weren’t the only people who hated Alan Ball’s Nothing is Private. We thought our unofficial reviews were somewhat scathing, but this one makes ours look positively glowing. Enjoy! (And kudos to its author, who is so very, very correct.)

I have four films on deck tomorrow, and I’d be lying if I said I fully expect to get to them all.

Random Factoid of the Day: Ellen Burstyn is Sufi.