With a stirring lead performance by Emile Hirsch, this is a “nature movie” where the beauty and horrors of nature collide in near-perfect juxtaposition.
By Vickieon December 27, 2014
0 Comments
Our Rating 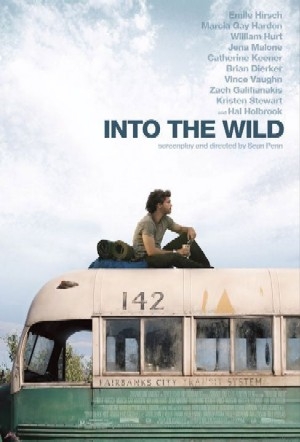 Director Sean Penn delivers a thoughtful, somber, enlightening and occasionally exuberant drama with his big-screen adaptation of Jon Krakauer’s book of the same name, which tells the true story of a wealthy kid who goes all Kerouac and tries to live off the harsh Alaskan land. With a stirring lead performance by Emile Hirsch, this is a “nature movie” where the beauty and horrors of nature collide in near-perfect juxtaposition.

Hirsch stars as Christopher McCandless who, at 22 and fresh out of college, decides to abandon his privileged upbringing – and his entire savings – to hit the open road in search of adventure and a life of solitude in Alaska. Much to the chagrin of his dysfunctional, upper-crust parents (William Hurt, Marcia Gay Harden), Christopher disappears and remains out of contact completely, save for the occasional signal flare to his younger sister (Jena Malone). As he leaps off the grid, he criss-crosses America, and even winds up in Mexico, meeting interesting people and picking up odd jobs to earn enough money on which to subsist temporarily.

Those vignettes of Christopher’s life alongside the folks he encounters are intercut with his experiences living on his own, out of an abandoned bus, in the middle of nowhere, Alaska…where, as his journals reveal, his efforts to survive become increasingly desperate and where it becomes apparent (to those who might not know his story) that this is one wilderness epic that won’t end well. Among the colorful characters whose lives intersect, however briefly but poignantly, with Christopher’s are: a warm-hearted hippie couple (Brian Dierker and Catherine Keener, looking stunning despite zero make-up); a joyful if sketchy farmer (Vince Vaughn); a widower (Hal Holbrook) looking for hope; and a beautiful young singer (Kristen Stewart) living in a commune. It’s a series of fairly typical “each one learns something from the other” scenarios, but all resonate nonetheless, and I challenge you not to tear up at the Hal Holbrook chapter. Or at Keener’s goodbye scene.

Top-billing in this languid, beautifully shot film is shared by Hirsch, turning in his best performance to date and likely looking at a nod or two come awards season, and by the wilderness itself. The rugged Alaskan terrain is gorgeous and threatening at the same time, and each of Christopher’s pit stops along the way – South Dakota corn fields, ocean-side camping – are equally lovely. Penn demonstrates a keen sense of pacing and storytelling throughout; at times, it feels like the story isn’t really moving…but it is. And, though the film clocks in at a hefty two hours and twenty-odd minutes, it doesn’t feel long.

Though Into the Wild isn’t exactly a feel-good movie, Christopher’s journey is fascinating and watching it, however harrowing, unfold on the big screen is definitely worth the trip to the theater.