Colin Farrell sinks his fangs into the scenery and gives it a good chewing in this fun but ultimately average remake of the 1985 film of the same name.
By Vickieon December 27, 2014
0 Comments
Our Rating 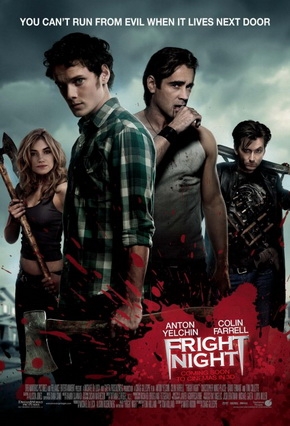 Farrell stars as Jerry, a mysterious, brooding neighbor in a Las Vegas suburb, who moves in next door to teenager Charley (Anton Yelchin, adorably awkward in a Jesse Eisenberg-lite kind of way) and his single mom (Toni Collette). Almost immediately, and in as awkwardly abrupt an exposition as screenwriter Marti Noxon (Buffy the Vampire Slayer) could manage, Jerry is exposed as a vampire.

Soon, Charley and his best pal, Ed (Christopher Mintz-Plasse, turning in exactly the same performance he’s delivered in every other movie he’s been in), are skulking around the neighborhood and Jerry’s pad, trying to gather evidence of his nocturnal proclivities. Raise your hand if you already know how that goes.

Unsurprisingly, Jerry is none too pleased at being spied upon and, being a vampire and all, is pretty quick to pick up the scent of Panicked Teenaged Boy – he sets out to silence Charley and Charley sets out to win the allegiance of legendary magician, and vampire expert, Peter Vincent (David Tennant, in a wickedly entertaining turn). It’s not long before the film becomes an extended chase sequence, with Charley and his mom and his comely girlfriend (Imogen Poots) simultaneously fleeing for their lives and plotting to stake their toothy tormentor.

Plot-wise, that’s essentially all there is, and the filmmakers do a decent job in terms of keeping the action moving and the proceedings lively. Though the tension is occasionally manufactured – is there really ever any doubt who’ll live and who’ll die here? – Fright Night still delivers some solid scares. It’s too bad that the CGI effects seem a little sub-par, though. Jerry-as-a-vampire looks fake, and the latex make-up used on occasion has a distinctly retro feel to it. (That is, not believable.)

Oh, but I did very much enjoy the throwaway line about the Scooby Gang. Cute.

For his part, Farrell seems to be having a blast. His Jerry is slick and tough and kind of mean, yet still possesses a sense of humor about his nefariousness. He reminded me a lot of Bender from The Breakfast Club, actually. Tennant outshines him, I think, and Yelchin doesn’t quite have the screen presence to match either of them.

While it didn’t really wow me in any way and may leave fans of the original feeling somewhat meh, Fright Night would probably make for an okay evening at the movies as summer, with its massive blockbusters, draws to a close and the autumnal Oscar-bait season gets set to begin.