You Couldn’t Ignore Me If You Tried: The Brat Pack, John Hughes, and Their Impact on a Generation

I don’t think I’ve ever wished I’d written a book more than when I picked up You Couldn’t Ignore Me If You Tried: The Brat Pack, John Hughes, and Their Impact on a Generation by Susannah Gora. 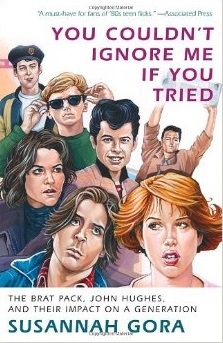 I don’t think I’ve ever wished I’d written a book more than when I picked up You Couldn’t Ignore Me If You Tried: The Brat Pack, John Hughes, and Their Impact on a Generation by Susannah Gora.  True to its title, the book delves into every aspect of the classic teen films that defined the 1980s and its young people.  Gora lovingly documents the making of the films and their soundtracks, then goes one step further to examine what happened after the films were released (both to the audience and to those involved in the films themselves).  The end result is a beautifully written, stunningly comprehensive slice of pop culture history that will make fans swoon.

After a rare glimpse into the formative years of John Hughes, we seamlessly transition to the making of his groundbreaking films, The Breakfast Club and Sixteen Candles.  The collaborative process forged a number of important relationships; most notably the working relationship between John Hughes and his young muses Anthony Michael Hall and Molly Ringwald, and the now-iconic bond shared by a group of young actors who would become known as The Brat Pack.  Before the bubble burst, Hughes would make one more great teen film with Ringwald (Pretty In Pink), and that group of beautiful, talented friends would make St. Elmo’s Fire.  This golden moment would come to an abrupt end after the publication of a New York Magazine article chronicling a night on the town with Rob Lowe, Judd Nelson, and Emilio Estevez (among others), lumping them all together with the Brat Pack label and painting them in a very unflattering light.

If you grew up in the 80s, chances are you still feel (or at least remember) a sense of disillusionment at the unraveling of this idealized world.  How is it that Molly Ringwald lost touch with John Hughes shortly after their last masterpiece?  Why in the world aren’t the Brat Packers still friends?  What made Emilio and Demi break up?  From the outside, it was all a cold, hard lesson in reality – the world we thought was perfect was not so perfect after all.  What Gora shows us, though, is that this was an even more bitter lesson to those who experienced it firsthand.  Interviews with the actors reveal that they were deeply saddened when their group of friends (i.e. “The Brat Pack”) disbanded.  It was not something they wanted to happen, yet it seemed beyond their power to stop it.  Says Judd Nelson, “I miss those people, and I tell you, I don’t know those people anymore.  I think about them.”  The distance that soon developed between Hughes and the young stars is described similarly – it wasn’t what they wanted, but it happened nonetheless.

Though things had changed by 1886, Hughes would still make two more classic teen films – Ferris Bueller’s Day Off and Some Kind of Wonderful.  Having just read about so many broken relationships, it was strangely moving to learn about the new bonds that formed during the making of Some Kind of Wonderful.  The shoot was fraught with disagreements and head butting, but the story of Maddie Corman winning the role of Eric Stoltz’s younger sister (following the sudden death of her mother) and making the film at such a profoundly sad time in her life is moving beyond words.  This has everything to do with Gora’s intuitive narration, and the revelation that director Howard Deutch and Lea Thompson later married (and are still together) comes as another huge payoff.  The pacing of this chapter alone is a testament to Gora’s considerable talent.  I cried three times, and Some Kind of Wonderful is one of my least favorite movies in the Hughes canon.

The book continues moving toward present day with a look at the Brat Packers’ transition to adulthood and Hughes’ rise to Hollywood power player.  Before it ends, we’re given one final hurrah with a glimpse into the making of the last great teen movie of the 80s – Say Anything.  It’s strangely appropriate that the book concludes with the death of John Hughes and an homage to his legacy, a sad twist that Gora could not have anticipated at the inception of this book.  By the end of the book we have come full circle, and we have been given permission to embrace something that has shaped our lives in countless ways.  They may only be movies, but it’s a body of work that still seems to say, “you couldn’t ignore me if you tried.”