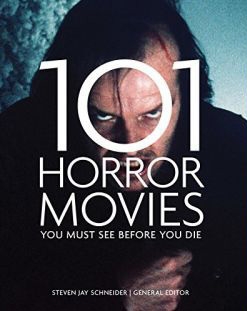 As promised, the book covers 101 films over roughly 100 years, and suggests the best picks for each decade (1910s-2000s). It’s a good sampling of horror film history, and covers foreign film as well as mainstream American fare, though you could argue that some selections don’t entirely qualify as horror. As an example, three recommendations from the 70s include The Texas Chainsaw Massacre, the Italian film Deep Red, and…Jaws. A massive summer blockbuster that could also be categorized as drama feels a bit out of place, but it’s also food for thought. Maybe you wouldn’t have included Jaws in a scary movie binge, but there’s no reason you shouldn’t.

This compact paperback is small enough to grab for quick reference (unlike, say, a coffee table book), but lacks a simple list of the 101 films included, so you’re stuck paging through the whole thing to see what’s what. Think Leonard Maltin’s movie guide, but with fun bat themed endpaper and pictures. Each film is represented by its poster, two pages of summary and review (including quotes from actors, directors, and producers, plus a blurb of trivia), and a still photograph from the movie. Frankly, it wouldn’t suck if the book were a little easier to savor since its chunky size makes it awkward to hold and its contents seem somewhat squashed. Do I grab this when I’m wondering what to watch, or do I settle in and absorb a full overview of horror history? 101 Horror Movies You Must See Before You Die suffers from a bit of an identity crisis, but is enjoyable nonetheless. 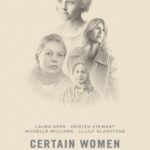 PreviousCertain WomenNext101 Sci-Fi Movies You Must See Before You Die