I must preface this review by saying that I am biased. The opinions expressed herein may not, therefore, be without prejudice and may, in fact, be altogether skewed. You have been warned. 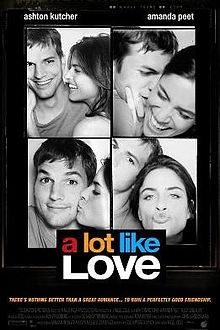 See, I think Amanda Peet rawks, so even though her latest big-screen outing isn’t really exceptionally spectacular, it does get bonus points for:

2. Allowing her to play a character who’s unabashedly flawed, insecure and wildly lovable.

3. Making the most of her comedic talents in what is otherwise a fairly predictable, run-of-the-mill romantic comedy about the on-again, off-again relationship between two archetypical characters over a seven-year time span.

Ashton Kutcher stars as Oliver Martin, aka Archetype #1. Oliver is the kind-of-goofy, doe-eyed, relatively strait-laced good guy who tends to pop up in movies like this one, where he invariably falls for the perfect girl he doesn’t realize is perfect until about 90 minutes of movie time have passed. Peet is Emily Friehl, aka the newly popular Archetype #2 – the quirky, free-spirited, rebellious, artsy beauty with a slightly dark/sad twinge, who shuns convention and practically does back-handsprings into the status-quo life of Archetype #1 to win his heart as a result (think Kate Winslet in Eternal Sunshine…, Natalie Portman in Garden State, etc.).

Oliver and Emily are strangers who meet en route to New York and promptly have sex in their airplane’s washroom before they even exchange names. Their only-in-the-movies friendship/romance/relationship then stops and starts every few years thereafter via random encounters, as each pursues his or her own life and love(s) despite the fact that, deep down, they know they’re meant to be together. Fate (and a screenwriter) naturally conspire to keep the would-be-happy couple apart by throwing wrenches into the works, almost all of which involve one or both of the characters repeatedly falling for the wrong people and/or suppressing their true feelings in moments that just scream out, “Now would be an excellent time to tell her you love her, moron!”

Structured like Serendipity meets When Harry Met Sally, the film isn’t really packed with surprising plot twists or innovative storytelling. I don’t really think anyone in the theater spent a second stressing over whether the characters would wind up together in the end, and that conventionality chips away at some of the story’s zest. But, having said that, A Lot Like Love still manages to rise above things like having Taryn Manning in its cast (was Jena Malone unavailable?!?) and be sweetly satisfying thanks, in large part, to its two likable leads and their onscreen chemistry.

When he’s not acting obnoxious and spastic, Ashton Kutcher is soooo much more appealing and attractive. He’s dialed down his usually grating and over-the-top TV persona (I challenge anyone not to change the channel after watching two minutes of him on Punk’d) for a much calmer, saner, nicer big-screen hero. His Oliver is just a good guy with bad timing, and he and Emily bounce off each other perfectly. Peet goes mano-a-mano with Kutcher and actually outshines him. She’s beautiful and funny and engaging, and she makes Emily the kind of gal you can’t help but love. Sure, she’s kind of a screw-up, but she’s a really, really endearing and adorable screw-up!

A Lot Like Love doesn’t tread new ground, but it’s some good, harmless fun. And if you’re not charmed by Amanda Peet by the time the credits roll, well…then…you have a heart made of stone, my friend.