Sometimes, seeing a very small, very sweet little movie amid the summertime blockbusters makes me happy. And that was certainly the case with Adam.
By Vickieon December 27, 2014
0 Comments
Our Rating 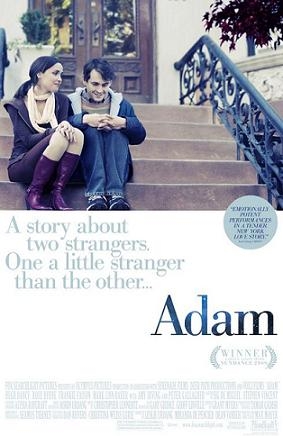 Written and directed by Max Mayer, and minus all the high-concept, big-budget bells and whistles that fill screens this time of year, the film is just a simple love story, told well by some solid actors.

Hugh Dancy stars as the titular character, a quiet electronics engineer who lives alone in a meticulously tidy New York apartment that he shared with his recently deceased father. Adam has Asperger Syndrome, a mild form of autism that results in social awkwardness and empathetic distance, and works at a toy company. One of his dad’s war buddies (Frankie Faison) acts as Adam’s de-facto guardian and confidante, but Adam doesn’t really have friends and lives an isolated life. His insulated world is suddenly turned on its ear when pretty young teacher Beth (Rose Byrne, Damages) moves in upstairs and the two forge a tentative friendship that eventually blossoms to romance.

To be honest, there isn’t much more to the story in terms of complexities. Despite a subplot involving Beth’s financier father (Peter Gallagher) being involved in some shady business dealings, the story centers solely on the relationship between its two leads – how Adam struggles to overcome his challenges, and how Beth tries to understand what loving someone with such restrictive boundaries might mean… and whether it’s something she really wants.

All the actors turn in lovely performances (though, Amy Irving – as Beth’s mom – seems like she didn’t have enough to do), and it’s largely for that reason that the film worked for me. As someone who isn’t particularly fond of Dancy, I found him endearing here. And as a huge fan of her TV series, I was quite pleased to see Byrne back on the big screen in something a little more meaty than dreck like Knowing.

Unfolding gently and without much fanfare, Adam works its charms on you slowly so that, by film’s end, the poignancy of Adam’s story will mean as much to you as it does to him.