Marketing itself as a political satire skewering the ideological divide between elite liberals and staunch conservatives, this über-violent, extremely gory is virtually all (literal) “skewering” with precious little “satire.” The result is a bloody, brutal, hollow mess. If you’re not a fan of watching bodies explode – in meticulous detail – right before your eyes, this isn’t the film for you.
By Vickieon March 14, 2020
0 Comments
Our Rating 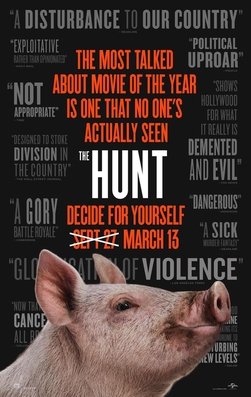 To be honest, I’m not sure who the target audience is for this film, but it definitely isn’t me. About 15 minutes in, I wondered if I should just walk out. “Do I really want to see a movie about people being killed?” But I stayed and, in some ways, I’m glad I did because watching the whole thing confirmed my suspicions about the film – namely, all hype and no substance. More importantly, though, it allowed me to witness the film’s lone saving grace: the unexpectedly great performance from its lead, Betty Gilpin.

Set in some kind of wooded area in the middle of nowhere, the premise of the film is pretty cut-and-dry: a group of wealthy American liberal elites kidnaps a rag-tag collection of “deplorables” and then hunts them for sport as a way of balancing the proverbial political scales in the wake of a Trump presidency. We hear about some of the sins of the targets – one (Ethan Suplee) hosts an Alex Jones-esque radio show, another (Justin Hartley) is a big-game hunter who shares photos of his kills on social media, and so on – while we simultaneously witness the arrogance and self-importance of the hunters, who all fancy themselves “woke” and do things like debate gender pronouns as they load up their weapons.

The first violent and squirm-inducing kill happens within the first five minutes, and the blood keeps splattering from there, with each death getting more gruesome or elaborate – one unfortunate victim is impaled, then shot, then blown up. Or shot, impaled and then blown up. I lost track.

Amid the carnage, two key figures emerge, one on each side of the battle. For the hunters, there’s Athena (Hilary Swank), a power-hungry, insanely wealthy executive and the organizer of the hunt; and for the hunted, Crystal (Gilpin), a smart, skilled former soldier and current car-rental employee, who knows her way around knives, guns and survival against the odds. As the body count rises on both sides, the film sets up an epic showdown between the two women. And that’s about all there is to it.

Feeling as though it was written by self-congratulatory frat boys (and not A-listers Damon Lindelof and Nick Cuse, who co-penned the screenplay), The Hunt is exhaustingly on-the-nose, and disappointingly devoid of smart social commentary, fresh ideas or any kind of insight. I could practically hear someone somewhere going, “Yo! Wouldn’t it be SICK to see that chick from GLOW fight that chick from Million Dollar Baby?!?!?”

The “jokes” are lame and easy, and the political arguments, few though they may be here, are stale and tired. There are also no “good guys” in this splatterfest battle – everyone is painted with the same two-dimensional stereotypical brush, which makes it hard to root for anyone. Well, anyone outside of Gilpin, anyway.

Admittedly, I’ve never felt strongly one way or the other about her work, but she’s pretty great here. Her Crystal is calm, cool and collected despite the relentless slaughter. She’s steely-eyed and smart, and watching her sidestep certain death over and over again – all while maintaining a brilliantly dry sense of humor – was the only entertaining aspect of this otherwise unappealing movie. 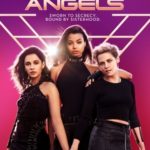 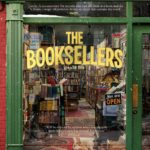