Where the Wild Things Are

There is something strangely and inherently sad in the whole tone of Where the Wild Things Are. It is a portrayal of childhood and growing up, but seemingly told with an adult eye that knows that innocence will soon be lost.
By Vickieon December 27, 2014
0 Comments
Our Rating 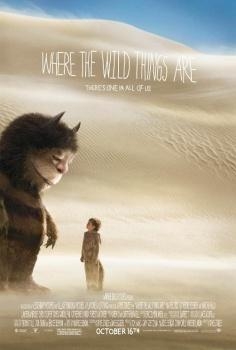 Where the Wild Things Are, the book by Maurice Sendak, is a story that is wedged into millions of people’s imaginations already, with its big friendly beasties and young Max, in his pajama footies and skewed crown. It’s the story of a troubled and cranky kid who runs away to his fantasy land, where he is king of all the wild things. Fleshed out for a movie, the characters are given distinct personalities, names, and their own issues, and an edge of adult knowledge is given to the story.

It is an interesting idea to make a feature length film from a story that is only 8 sentences long, but who better to give it a whirl than Spike Jonze, creator of such fantastic weirdness as Being John Malkovich, Adaptation, and Bjork music videos? But what surprised me is that the film is so ultimately melancholy. I was a bit alarmed at the opening scene where Max (Max Records) is playing around in his furry one-piece, pointy-eared jammie suit, practically frothing at the mouth chasing his dog. His crazed, rabid face is frozen in mid-snarl, then the title comes on screen. His single mom (Catherine Keener) is saintly and overworked, but the kid is still lonely, trying to get attention from his older sister and the neighbor kids. His loneliness ends up as misdirected rage, and after an incident, Max runs away.

Max’s imagination brings him into a boat that crosses a stormy sea, and runs aground on an island where the Wild Things are. The Wild Things are huge creatures, some furry, some feathery, some stripey, some beaky, and they all walk around on their hind legs. Max is tiny but fierce, and when the Wild Things wonder who he is and where he came from he explains he is a king from a distant land and he has magical powers, and they see no reason to question this. Max fits in perfectly with this new group of friends, who play very hard, like to break things, and in general have one wild rumpus after another. He is the king of this new world, until cracks start to form in the relationships between the characters, and cracks form in his own lies.

There is something strangely and inherently sad in the whole tone of Where the Wild Things Are. It is a portrayal of childhood and growing up, but seemingly told with an adult eye that knows that innocence will soon be lost. The friendships new and broken are shown with a wistfulness and often regret. Rather than an inherent joy at the happy moments, the good times already seem to hint at things falling apart, just like the big beautiful stick-nests that are destroyed in a violent rage. And when one of the strange beasties named Carol (voiced by James Gandolfini) breaks down in shoulder-slumping grief, I swear the image of that distraught creature was one of the saddest things I’ve ever seen. That image of extreme sadness was the overall feeling that I was left with after viewing Where the Wild Things Are, and that was the last thing I was ever expecting.

The DVD release includes featurettes called “The Absurd Difficulty of Filming a Dog Running and Barking at the Same Time” (hilarious behind-the-scenes footage which is exactly what it sounds like), “The Big Prank” (involving a suspended Vespa against a green screen), “Vampire Attack” (on-set fun with fangs), and “The Kid Takes over the Picture” (which talks about all the kids on the set).