This is just a dreary movie with a thin, dreary plot about dreary, depressing people. Have I mentioned “dreary”? 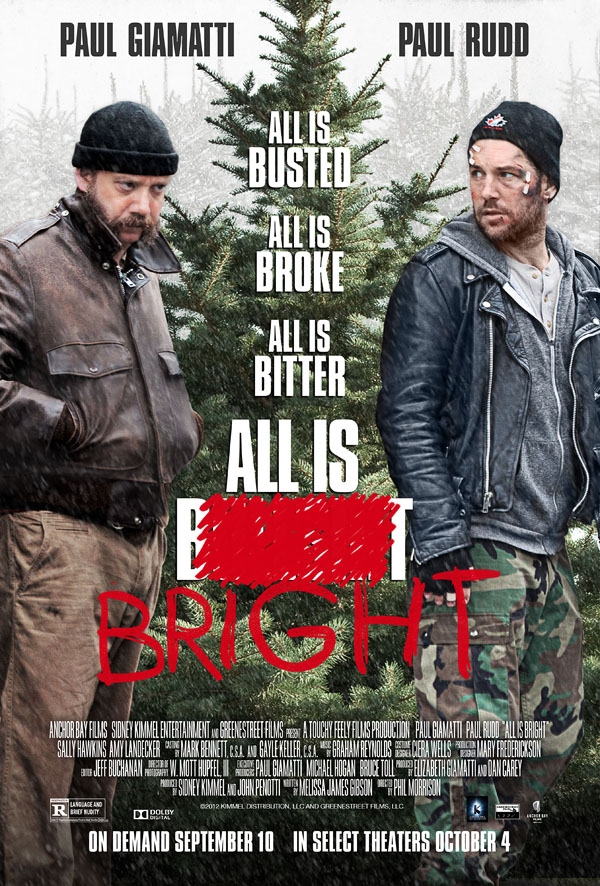 I’m not the sort of person who expects every Christmas movie to be jolly and upbeat, but All is Bright is just about the dreariest bit of cinema to wrap it’s dirty paws around any holiday ever, and I’ve seen One Magic Christmas, where basically everybody dies and then things just get worse from there. First of all, don’t be thrown by the title. All is Bright is about as desaturated as a movie can be without actually being black and white. Also, don’t expect a lot of wry sarcasm and dark humor about how it’s the Christmas season and nothing is bright. This is just a dreary movie with a thin, dreary plot about dreary, depressing people. Have I mentioned “dreary”?

Upon his release from prison, Dennis (Paul Giamatti) discovers that his wife has started a relationship with his former partner in crime, Rene (Paul Rudd), and told their daughter that he is dead. With no home life to return to and few legitimate prospects, Dennis falls back in with Rene and attempts a legal but slightly dodgy get rich quick scheme. These two French Canadians head to New York to open a Christmas tree lot in the hope of cashing in big for the holidays. More than anything, Dennis would like to buy his daughter a piano. It is her main passion in life and she practices daily on a paper keyboard. Her only access to a real piano is at church, and it is his heart’s wish to change that.

As is to be expected, all is not bright in the Christmas tree business. A competing lot is located right next door, and Rene and Dennis go through long stretches with no sales at all. In the meantime, they spar over the woman they both love, lament the fact that crime paid much better than this, and endure a series of mishaps and setbacks. Dennis also starts a new relationship with a crazy (and rather amusing) Russian woman named Olga (Sally Hawkins). Her screechingly outrageous presence is both jarring and refreshing in the otherwise monotone world of All is Bright.

Ostensibly, All is Bright has all the makings of a wicked dark comedy, but the concept is poorly played and yields neither laughs nor tears. The general absence of highs and lows removes any sense of gravitas, and why again do we have Rudd and Giamatti playing French Canadians? It’s not believable or relevant in the slightest, but we’re constantly reminded that something is a bit off kilter, as if the actors have their shoes on the wrong feet. You don’t notice it all the time, but there’s an underlying clumsiness to the performances and to the structure of the movie itself. That, coupled with the general gloominess, is just about enough to suck all of the air out of your Christmas spirit.