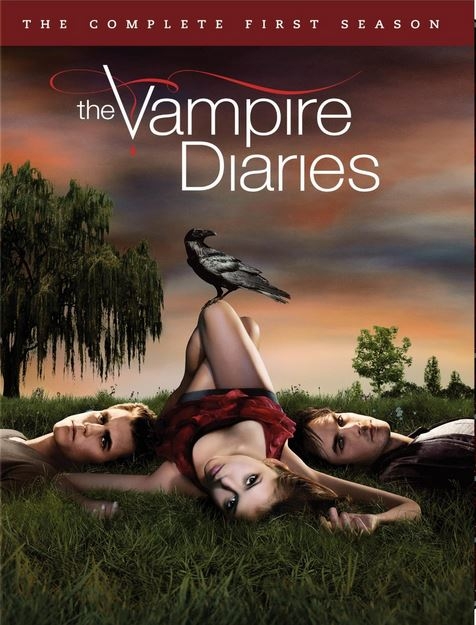 With a tighter, better-scripted storyline and mythology than True Blood (without all the ickiness and graphic sex), and with more of a scary edge than the Twilight series, The Vampire Diaries falls somewhere between the two, and beats them at those other bloodsuckers at their own game.

In present-day Mystic Falls, Virginia, two brothers return to their hometown. Stefan (Paul Wesley) and Damon Salvatore (Ian Somerhalder) are young, handsome, and quickly settle back into the huge family mansion that has been kept by their kind-of nervous uncle. Their presence in town isn’t really questioned. After all, the name Salvatore shows up on the list of the Mystic Falls’ founding fathers. But is it a coincidence that in 1864 there just so happened to be Salvatore brothers named… Stefan and Damon?

Brooding Stefan (who has a sort of scowly-Morrissey-look about him) falls for local high school girl Elena (Nina Dobrev), who is brooding for reasons of her own. She and her brother Jeremy (cutie-pie Steven R. McQueen) just lost both of their parents in a car accident months before. They are now living with their in-over-her-head well-meaning young aunt (Sara Canning) who is just trying to keep the family from unraveling further. Oh, and did I mention that Elena is a dead-ringer (no pun intended) for a Civil War-era vixen named Katherine, whom both of the Salvatore boys loved? Drama ensues!

The Vampire Diaries is a soap opera. No reason to pretend it isn’t. It is also the classic good brother vs. bad brother as Stefan tries to be a “vegetarian” with a soul while bad-boy Damon runs around being very very bad (which involves Somerhalder making his crazy-eyes at potential victims, before taking them down). Sure, we’ve seen a lot of this before, like a best friend who is also a witch (hmm… Buffy?), a loophole that allows some vampires to walk around during the day (Twilight?), and even the catch that getting bitten doesn’t automatically doom you to become a vampire (True Blood). All the actors, from the leads to the supporting characters are appealing, with Somerhalder’s creepy smarminess (mixed with sexy allure) totally stealing the show.

But what I like about The Vampire Diaries is that literally in every episode, the show managed to surprise me, with some juicy plot turn that would make me gasp, “WHAT?!?!” or “They did NOT just do that!” What is so great is that the show is so well-written that the crazy plot-twists actually work, rather than coming across as jumping-the-shark. TVD kept me guessing through the whole first season, and I have to admit that I’m hooked.

The Blu-Ray is chock full of extras. There are the usual “unaired” scenes, a gag reel, commentary on the pilot episode, and a bunch of featurettes like “When Vampires Don’t Suck!” (highlighting vampire fandom), “Into Mystic Falls” (about the creation of the show), “The Vampire Diaries: A Darker Truth” (a kind of cheesy series of home-movie-type webisodes of a guy going to Mystic Falls to find vampires), and much more (including a downloadable audio book of L.J. Smith’s novel The Vampire Diaries: The Awakening).