I was reminded yet again why I am a dog person. 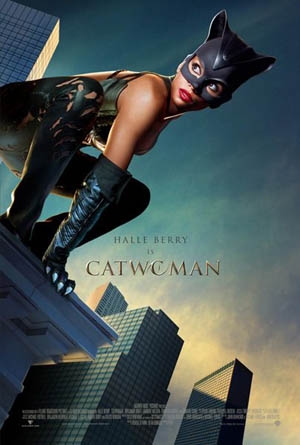 I actually kind of liked Catwoman, except for the part where Halle Berry turns into a cat. I’m not just being facetious. The movie gets off to a decent start with Halle Berry as Patience Phillips, a nebbish but talented artist with poor fashion sense. She hasn’t quite made her mark on the art world, so she designs print ads for a cosmetics company. She’s a bit of a doormat, but you can tell she has a strong sense of who she is. In short, she’s the sort of girl you’d want for a friend—the sort of girl you’d ask on a date if you were a cop played by Benjamin Bratt.

As it turns out, the cosmetics company she works for is Evil. It’s headed by Laurel (Sharon Stone) and George Hedare (Lambert Wilson), and they’re Evil too. They’re about to launch a new moisturizer that reverses the effects of aging, but they’d rather not mention that it is also addictive and eventually eats your face off. When Patience learns too much about their sinister plot, she winds up dead, and pretty soon the cats converge on the scene.

One of the felines just happens to be of the enchanted Egyptian variety, and he brings Patience back to life as Catwoman. She soon finds herself sleeping on top of her bookcase, eating mass quantities of tuna, and otherwise behaving strangely. Before you know it, we’ve got Halle Berry making embarrassing purring noises and wielding a whip. Of course a cat with a whip brings to mind the term pussy whipped, which I’ve always despised, and I started to question the portrayal of our so-called heroine.

Becoming Catwoman doesn’t do a lot for Patience’s personality. In fact, she kind of turns into a bitch. Pit her against villainess Laurel Hedare (Stone) and you’ve got a duo reminiscent of Crystal and Alexis on Dynasty. When Laurel is warned that she doesn’t want to shoot a cop, she fires back, “I’m a woman, I’m used to doing things I don’t want to do.” Um, yeah. I guess someone forced her to become a bratty model and marry a rich businessman she despised.

While discussing the shortcomings of Catwoman with a trusted friend, she pointed out that Sharon Stone just doesn’t make a very good villain. That’s absolutely true. Let’s assume for a moment that she wants to launch Beau Line because she’s bitter about her life of superficiality and wants to destroy the faces of other women in a convoluted revenge plot. Now that’s a story! Instead, her flimsy motives leave us with two cats fighting, and I was reminded yet again why I am a dog person.