Pride and Prejudice and Zombies

If you take a step–or rather a tiptoe–back to look at the big picture, Pride and Prejudice and Zombies effectively a one-joke story. Jane Austen’s novel of proud Mr. Darcy falling for smart, sassy and independent Elizabeth Bennet (who, gasp!, is socially lower than him), has been beloved for two centuries. Now, for whatever reason (people got tired of straight remakes?) the open copyright made the story fair game for tinkering, and who, lately, doesn’t love zombies? 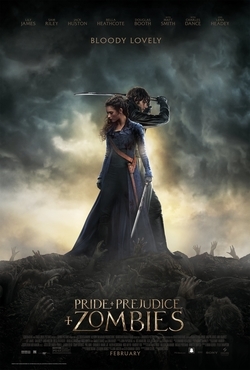 I tried to read Seth Grahame-Smith’s mash-up novel on which the film is based, and I freely admit I made it through just one chapter. However, like a lot of fantasy, throwing zombies into a period piece works much better on film (in my humble opinion). The characters along with much of Austen’s dialogue is intact, but in this version of 19th century England, the empire suffers from a decades-long zombie plague. The Bennets, like other well-to-do families, have been trained in Asian martial arts (the snobbier upper-crust prefer Japanese fighting over Chinese), but the family’s main goal is still (squeal!) to find proper, well-to-do husbands in which to marry. Daughter Elizabeth (Lily James), however, doesn’t want to settle–if she is to be married, she wants a husband that sees her as an equal (and won’t make her lay down her sword).

Mr. Darcy (Sam Riley) is still a humorless, proud man that glowers in the background while his sweet friend Mr. Bingley (Douglas Booth) falls for Elizbeth’s sister Jane (Bella Heathcote). Darcy and Elizabeth still dance around each other in a hate/love relationship, except this time their ballet involves swords, roundhouse kicks to the chest, the smashing of furniture, and a few slain zombies that happen to be in the way of true love.

I have to admit, the straight-faced introduction of the undead into well-worn and familiar Austen scenes made me giggle. It helps that the cast is completely game, and is strong enough that I honestly think they could have pulled off a straight retelling of P&P rather admirably. Matt Smith as the fluttery and irritating Mr. Collins is a hoot, and turning his patroness, the Lady Catherine de Bourgh, into a badass warrior with an eyepatch and leather pants (and played by Lena Headey, no less) was inspiring. And note that it is her Game of Thrones co-star Charles Dance as Mr. Bennet, reminding us that he isn’t always as scary as all get-out.

PPZ is silly fun, and only really starts to lose a little bit of steam in the last third or so when the zombie action turns to a walled London under siege. Like any adaptation, cramming P&P into a feature film also tends to blur some plot lines and characters, as PPZ dutifully tries to give due diligence to the source. But other than Sam Riley’s gravelly, hissing, dialogue from the Batman playbook, the cast totally makes this film fun. I predict a new cosplay trend with Empire-waist dresses accompanied by leather booths and swords at the next Comic Con.