Gothic, quirky and more than a bit of fun, the big-screen adaptation of the Ransom Riggs novel of the same name is a perfect match for director Tim Burton’s signature storytelling style and aesthetic approach.
By Vickieon December 9, 2016
0 Comments
Our Rating 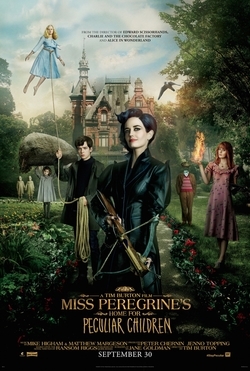 As its title suggests, the key element in the whimsical fantasy-adventure is a secret orphanage – hidden within a time loop on a remote island in Wales – housing a number of children with extraordinary abilities (think: a kinder, gentler version of Xavier’s School for Gifted Youngsters) and presided over by the titular governess/guardian (Eva Green), who’s sort of like Mary Poppins’ tougher, edgier, crossbow-toting younger sister. Among others, there’s a kid who’s invisible, a boy with a belly full of bees, a guy who can reanimate the dead, a teen who can start fires with her hands, a little girl with superhuman strength and another who can cause vegetation to grow to epic proportions just by touching it.

Into this magical world stumbles Jake Portman (Asa Butterfield), a seemingly ordinary Florida teenager whose late grandfather (Terence Stamp) has sent him on a literal journey of discovery, guided with a few scant clues and a healthy dose of dire warnings. Soon, Jake is teaming up with the ethereal, made-of-air Emma (Ella Purnell) to save Miss Peregrine and her array of charges from a glowing-eyed, super-powered villain (Samuel L. Jackson), who’s intent on killing the children, eating their eyeballs (seriously) and absorbing their life forces in order to achieve immortality.

Green is superb as the fiercely protective proverbial mother bear, whose keen sensibility is rivalled only by her über-cool-under-pressure demeanor – she’s easily the coolest, baddest babysitter anyone could ask for. Butterfield does a nice job as the thoughtful, insecure hero who gradually grows into his own, and his eclectic collection of co-stars are, for the most part, charming and likeable. The supporting cast includes some heavy hitters (Judi Dench as a fellow governess, Chris O’Dowd as Jake’s dad, and Allison Janney as a therapist) who add some heft to the proceedings. Only Jackson – with his spiky teeth and wild hair – seems like he’s WAY over-chewing the scenery and kind of phoning in his performance.

Dripping with Burton’s distinct aesthetic, Miss Peregrine’s is as delightful to behold visually as it is to experience as a filmgoer. The sets, make-up, costumes and hair are gorgeous, all infused with the unique Burton touch, so that you could just easily see these characters or their environments in any number of his previous productions. The effects are impressive, with a number of standout moments (Emma literally blowing away a sunken-ship-ful of water among them). And, action-wise, the whole thing is just as rollicking as a Harry Potter film, just as appropriately spooky as a Goosebumps tale, just as exciting as something out of Percy Jackson’s diary and an overall cinematic good time.

Though there’s no word yet on whether a sequel will unspool, there are two more books in Riggs’ series. And this film – with its family friendly vibe and undeniable affection for its unusual band of misfit young heroes – certainly feels ripe for one.