Sometimes, good actors make bad movies and, though you know you should probably know better, you find yourself liking those bad movies despite their obvious flaws. That was the case for me when I saw Identity Thief. 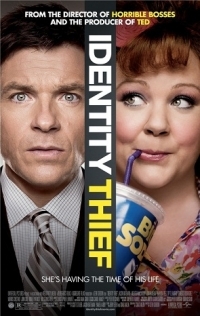 In this buddy road movie – that bears an uncanny, if not as successful, resemblance to John Hughes’ far more brilliant Planes, Trains and Automobiles – Jason Bateman and Melissa McCarthy are strangers trying to make their way from Florida to Colorado, who encounter a colorful array of wrenches thrown unceremoniously into their plans at every turn. That’s the basic gist of the movie; the fact that he’s a happily married family man, and she’s a schemer caught stealing his identity, is largely beside the point. Especially since, fairly early on, the film loses sight of that central storyline and never really gets itself back on track.

At the outset, Bateman’s Sandy Patterson is on a mission: bring McCarthy’s blousy, bouffanty Diana to justice. But no sooner does he have her in his crosshairs than a series of supplementary characters – including a grizzly bounty hunter (Robert Patrick) and a pair of maybe-assassins/maybe-just-lackeys/I-really-don’t-know-whats (T.I., Genesis Rodriguez) – joins the fray because, as it turns out, Sandy isn’t the only person Diana’s pissed off. Because he’s a good guy, Sandy helps Diana flee… and the two then become a team, albeit a dysfunctional one. That’s where the movie kind of abandons its focus in favor of simply tacking one outrageous scenario onto another… not to mention throwing in an unnecessary amount of violence (do people really need to be shot? repeatedly?) that feels out of place in this otherwise relatively genial picture.

Here’s the thing, though: Melissa McCarthy is fantastic in this movie, and it’s really really hard not to like her even when the material feels sub-par. In addition to her previously proven comedic talents, she also brings a surprising amount of dramatic depth to what could easily have been a two-dimensional character. The quiet, dialogue-free moments when Diana is most vulnerable, most hurt and most real are tiny glimmers of greatness. And, while Bateman turns in a fairly signature Jason Bateman Performance™, he’s nonetheless likable and funny.

The supporting actors, though occasionally hammy (Robert Patrick, I’m looking at you), round out the cast nicely… even if they’re not given much to do. Jon Favreau, John Cho and the always delightful Amanda Peet are collectively left on the fringes and given precious little screen time despite their skills. Too bad – having any of those folks join in the madness, instead of being benched on the sidelines, would have been much more interesting than anything T.I. and Genesis Rodriguez turned in. (Honestly, most boring villains ever.)

Again, the plot of the film – average Joe stuck traveling with comically loutish stranger – is very familiar and could have yielded terrific results, but the execution is meh and, in the end, Identity Thief isn’t quite an accurate sum of its impressive parts.