Count me among those who kind of hated the introductory Fantastic Four film. Filled with cheesy acting, a silly script, and countless montages to move the action forward, the film bored me silly and made me cranky. I was not looking forward to the sequel, Rise of the Silver Surfer, especially after the arrogant marketing stunt of issuing U.S. Mint quarters with the image of the new character (the coins were later deemed illegal tender).
By Lindaon April 27, 2015
0 Comments
Our Rating 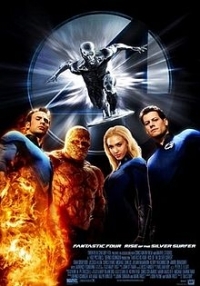 So I was surprised that I found Rise of the Silver Surfer to be entertaining, in an entirely popcorn-and-Red-Vines kind of way. The film reminded me of Saturday matinee movies of childhood, or action-packed mindless after-school cartoons. Sure there are still the strained attempts at hipster jokes and clever humor, but the sequel vastly improves upon the original, especially since there is virtually no character setup to deal with.

Reed Richards (aka Mr. Fantastic, aka actor Ioan Gruffudd) and Sue Storm (Jessica Alba) are on the verge of their wedding day, which promises to be the celebrity wedding of the season. But things of course are destined to be interrupted as a mysterious force from outer space—appearing like a comet or meteor, but emanating its own force—has swooped in from the stars and is zooming around Earth, causing snow to fall on the Great Pyramids, and a sea in Japan to solidify. This celestial being is leaving deep craters into the center of the Earth, and the military calls upon the Fantastic Four—which also includes fireball playboy Johnny Storm (Chris Evans) and newly-in-love hunk of rock Ben Grimm (Michael Chiklis)—to save the day.

The mysterious force is a silver guy on a silver surfboard, zooming through the air, slicing through buildings, and cutting holes into the planet. He looks like the T-1000 from Terminator 2, but more chiseled, and admittedly more cool. As ridiculous as I think it is that a creature from outer space would ride a surfboard, the character worked. And I’m sure it helps that the Silver Surfer is played by Doug Jones, who is the go-to guy for other worldly characters (he also played the creepy titular character in Pan’s Labyrinth). He brings a somber nobility to the mysterious and dangerous fellow.

Showdowns ensue in picturesque worldwide locations, and characters that we thought were long gone show up again to ruin everything. (By the way, did you ever notice in these kinds of movies, that if there is going to be a huge hole drilled into the Earth, it will just so happen to occur right in the middle of the River Thames, at the base of the precariously balanced London Eye Ferris wheel? I’m just sayin’.) The special effects are great, especially the image our dear planet on the verge of getting enveloped in a life-sucking massive cloud.

Despite how resistant I was to the movie, I found myself to be entertained. The Fantastic Four themselves are pretty shallowly-developed and are rather unremarkable except for their superpowers. But the Silver Surfer himself is inherently cool, and by the virtue of being there in the first place, amps up this Fantastic Four sequel to be more enjoyable than it has any right to be.

The Power Cosmic Edition 2-disc DVD of Fantastic Four: Rise of the Silver Surfer once again packs in extras to the gills, which, for a change, is actually a good thing. For instance, the seemingly typical extra (with an unseemingly long name) “Family Bonds: The Making of Fantastic Four: Rise of the Silver Surfer” is actually quite interesting, covering the pre-production as well as the production of the movie, with raw behind-the-scenes footage, and no voice-over smarmy commentary to distract. The “Interactive Fantasticar” is really quite silly, where you just click through various angles of an artist’s rendition of the superhero team’s car. There are deleted and extended scenes, a gallery, and a handful of extended in-depth featurettes, including the fascinating “Sentinel of the Spaceways” (which runs almost 40 minutes), about the comic-book origins of the Silver Surfer character, with creator Stan Lee, among others cheerfully spinning yarns about the origins of the cult comic book character.