Queen Latifah, with her natural screen warmth, shines in what is otherwise a sweet and wholly predictable movie. 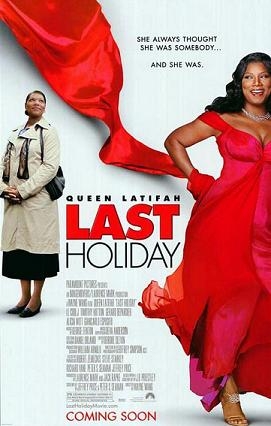 Queen Latifah has a wonderful screen presence, and is often the best thing in some crappy movies (like the dreadfully dumb Bringing Down the House with Steve Martin). With the fluffy and sweet Last Holiday, she has found a surprisingly good match in director Wayne Wang. Wang, whose best movies have been patient character studies like Smoke and The Joy Luck Club, goes for more broad comedy in Last Holiday, but maintains affection for his characters. With Queen Latifah, he focuses on her natural screen warmth, and she shines in what is otherwise a sweet and wholly predictable movie.

Latifah play Georgia Byrd, a rather mousey woman who works retail in a large department store. She clips coupons, has a crush on a shy co-worker Sean (LL Cool J, also being awfully cute), and has a “Book of Possibilities” scrapbook that she shows to no one. She dreams of eating the fancy recipes that she whips up and gives to her elderly neighbor (she herself is trying to diet), she dreams of going to fancy European hotels where famous chefs dazzle the guests, and she dreams of marrying Sean, despite the fact that they are too shy to ask each other out. One day at work, Georgia bumps her head, and finds out via CT scan they she has a untreatable terminal disease. Well, what would you do if you found out you had three weeks to live? Quit your job, cash in your 401K, and follow your dreams.

In fine fashion, Georgia shows up at the super-fancy Grand Hotel Pupp (yes, pronounced “poop”) in the upscale skiing mecca of Karlovy Vary in the Czech Republic. With her “money is no object” attitude, the staff and guests assume that she is Someone Important, and immediately tongues start wagging, wondering who this powerful, rich mystery woman is.

Because this is the movies, all the rich people are catty and competitive, and all of the staff are stomped upon and unappreciated. Georgia, with her heart of gold, is nice to everyone, and soon is the most popular guest at the hotel, first to the staff and chef (Gerard Depardieu), and eventually to the snotty rich people, despite crabby billionaire Kragen (Timothy Hutton) and his cronies trying to find the real dirt on her mysterious riches.

Even though there is much cheese and corn to find in Last Holiday—like some ridiculous action sequences where unafraid-of-death Georgia decides to partake in several extreme sports, followed by the competitive Kragen, as well as the wholly predictable ending—this movie still had me cheering for the lead character throughout the story. When faced with mortality, Georgia blossoms into, well, a confident and giving queen of the people when she realizes that she literally has nothing to lose. This cute movie ends up being surprisingly inspiring, even if you find yourself fighting it.