Dawn of the Planet of the Apes

Okay. I get it. The special effects in this sequel are mind-blowingly awesome, but the motion picture beneath the motion capture is kind of… well, meh, if I’m being honest.
By Pie Pal Vickieon December 23, 2014
0 Comments
Our Rating 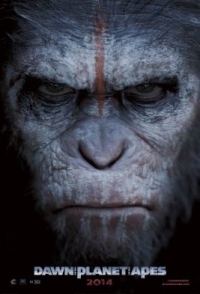 I know, I know… everyone and their cousin is trumpeting the wonders of director Matt Reeves’ dark, moody, surprisingly violent, (digital) ape-filled opus, but I’m not in the target demo, so all I kept thinking as I watched was, “Yeah… and?”

Set roughly 10 years after the events of Rise of the Planet of the Apes, the film finds chimps, apes, gorillas and orangutans ruling the planet thanks to a “simian flu” that wiped out virtually all of humanity. Caesar and company have built a massive, elaborate compound in the forests outside of San Francisco (complete with a classroom where young chimps are taught to read), and are living in relative harmony until a rag-tag band of humans – led by Jason Clarke’s wishy-washy Malcolm – accidentally stumbles upon the primate utopia.

Because, in a nutshell, that’s kind of what the film is: an extended battle, in different locations, between apes and humans, and with one very anvil-like parallel drawn between both sides – namely, that every hero needs a villain, and every effort for peace can be undone if someone shouting “war!” screams louder. On one side, you’ve got trigger-happy human Dreyfus (Gary Oldman), who’s sort of the de-facto leader of a community of flu survivors. He wants to destroy the apes. On the other side, you’ve got Koba (Toby Kebbell), a scarred, bitter, vengeful former lab chimp. He wants to destroy the humans.

So, it doesn’t matter how nice Caesar and Malcolm are to each other, or how far they’re able to broker civility between the species – Dreyfus and Koba are ready to lead their respective tribes into a fight to the death.

And fighting takes centre stage often. Those scenes are particularly brutal, and I’d caution any parents with preteens eager to see the monkey movie (as an aside, where are all the monkeys? why are there no Capuchins kickin’ around in the trees with Caesar and company?) that there are plenty of nightmare-worthy images sprinkled throughout Dawn. For me, the seemingly endless fights and battles (while, yes, technically impressive) just became cinematic noise after a while. I didn’t care who was fighting, or why, and I often couldn’t tell which ape was which.

I’m also someone who needs fleshed-out characters, and character development, yet every human in this movie is instantly forgettable. Again, I realize this isn’t an Oscar-bait drama, and that I shouldn’t expect it to be a performance-driven vehicle, but I honestly couldn’t tell you what Keri Russell’s character’s name is, or what Malcolm does for a living (I’m going to guess… engineer?), because none of it registered amid all the raging apes. Sure, the digitally created apes are the stars of the film, but the entire human cast kind of gets a raw deal. Ah well.

For fans of Rise, Dawn will undoubtedly deliver, and is something they’ll want to check out on the big screen. For me, though, it was just OK.