Making the Grade is both an awesome movie and an awful one. As soon as you see Cannon Films and the names Menahem Golan and Yoram Globus in the opening credits, you know you’re in for a hot mess (check out the documentary Electric Boogaloo: The Wild, Untold Story of Cannon Films if you’re not familiar with their story). Even so, Making the Grade is so much a product of the times that you’ve kind of got to love it. 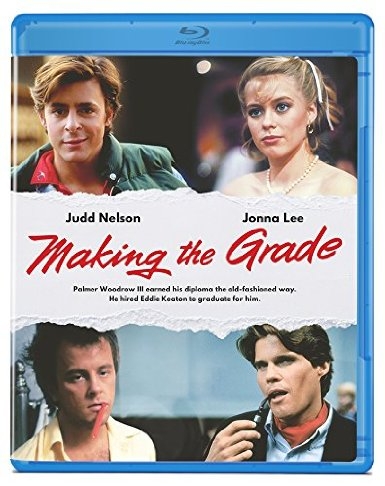 Judd Nelson stars as Eddie Keaton, a ne’er do well who lives in his car and has nonspecific dealings with shady people. He owes money to some bad guys or double crossed the wrong person…you know, the sort of thing that results in an elaborate chase as soon as you go outside. Meanwhile, on the opposite end of the social spectrum, Palmer Woodrow (Dana Olsen) has his own problems. He’s a privileged rich kid who can’t be bothered to pick up his dirty clothes, much less go to school, but his absentee parents have made it clear that they expect for him to graduate. What’s a guy with more money than brains to do? Hire someone else to take his place.

Palmer reasons that since he’s never really shown up at school, no one actually knows what he looks like. His parents basically never visit, so why not send someone else to do the dirty work? Palmer hires Eddie Keaton (obviously in need of income and better housing) to earn a diploma on his behalf. He also employs his nerdy friend to coach Eddie on the details of his life and the ways of the Preppies. What could go wrong?

For the most part, very little does go wrong. Making the Grade is a typical fish out of water story set against a backdrop of hard partying kids and youthful hijinx. Is this high school or college? I don’t know! All of the kids appear to be about 30, except for Palmer’s girlfriend Muffy, who looks more like a hard 35. Eddie obviously can’t let on that he’s acting as Palmer, so he says his name is Bif and winds up in an ongoing flirtation with Muffy. This, in turn, complicates things with Tracey Hoover (Jonna Lee), the beautiful preppy girl Eddie was beginning to fall for.

Making the Grade is often nonsensical, with much of its humor hinging on a sort of Soc vs. Greaser dynamic. A particularly hilarious scene finds Eddie shopping for Preppy clothes under the guidance of his coach, balking at rolled up pants and alligator shirts in bright shades of pink, green, and yellow. Though it’s completely over the top, so too was the whole Preppy sensibility. Eddie’s rough-around-the-edges world is embodied by the arrival his bookie, Dice (Andrew Dice Clay), who quickly ratchets the party up another notch. As worlds collide, Eddie begins to wonder if the rich kids have even less regard for their universe than he does. It’s even less compelling than it sounds, but it’s all good, clean, slice-of-the-’80s fun. 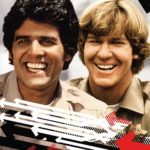 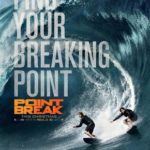