Nelson Mandela’s life is a great story that deserves to be told. However, Mandela: Long Walk to Freedom is, unfortunately, not a great film. 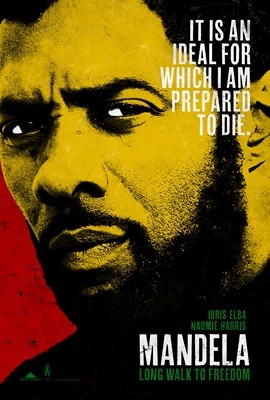 The release of Mandela: Long Walk to Freedom could not have been more timely. I saw a press screening within a week of his death being announced, which prompted a worldwide outpouring of commemoration and reflection for a greatly admired man who won the Nobel Peace Prize in 1993 (jointly with F.W. de Klerk) when he was released from prison after 27 years. The influence of this man, who helped end apartheid and unite South Africa peacefully after years of strife cannot be denied. Nelson Mandela’s life is a great story that deserves to be told. However, Mandela: Long Walk to Freedom is, unfortunately, not a great film.

Perhaps Mandela, as a subject, is still too fresh. After all, the film was completed while he was still alive, so there is not room for reflection, only reverence. Based on Mandela’s own autobiography of the same name, I got the sense that the filmmakers were so respectful that they were afraid to leave anything out.

This leaves a perfunctory film that is told chronologically, chapter by chapter, from the time young Mandela was a boy in a rural native village, to when he was a feisty lawyer that wooed the ladies, to his first marriage, to his affairs and breakup of his first young family, to meeting Winnie Mandela, to getting involved in the questionably violent tactics of the ANC (African National Congress), to getting arrested with his ANC rebel cohorts and getting sent to Robbin Island for 27 years, etc. If that sounds like a list, well, the movie feels like a list. Each milestone is treated to about 7 to 10 minutes it seems, and like a tour of a national historic site, I image a park ranger clapping their hands once and saying, “Moving on! Next we have Mandela’s release from prison, where he finds a warm reception from his extended family, but a cold reception from Winnie…”

Idris Elba, who I think is a fabulous actor, does his best as Mandela, but the role is written rather thinly, and it seems that half the time the British actor is trying to remember to speak with a South African accent. Naomie Harris as Winnie Mandela, who by all rights is an extremely interesting person, is given less to work with. Winnie is portrayed as angry and betrayed (which, if you think about it, she had every right to be), but she is dismissed at the end of the film by showing her glaring, alone, listening to reports of Mandela’s win as President while she angrily swills a glass of booze (really?).

There are a few times when the story comes to life, like when young Mandela, with a mob of ANC compatriots, storms a whites-only train station platform, triumphantly boarding a train to plop down smiling next to a startled white woman (only to be arrested immediately). But these moments are rare. The rest feels like a rote history lesson without any spark. Nelson Mandela’s story, I’m sure, will one day be treated to an epic and excellent film, as it deserves to be. But for right now, you are best served seeking out many of the television and documentary tributes about his life to get the story.