If your inner voice found a vessel, would it manifest itself as a talking beaver puppet that sounded like Michael Caine? 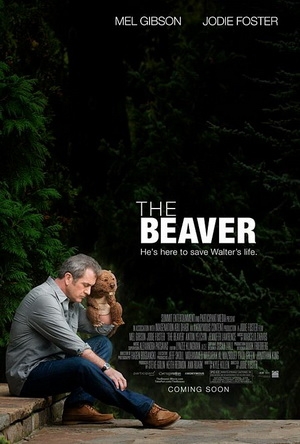 The Beaver is a tricky story. Part comedy (and yes, some of it *is* squirmingly funny), and part melancholy drama, it walks a thin, sometimes wobbly line between the two genres before jumping off the deep end into a quite tragic story.

We meet depressed family man Walter Black (Mel Gibson) as his wife Meredith (Jodie Foster) has kicked him out of the house. It’s been two years since he has fallen into a pit of despair, and he has sneakily stopped going to therapy—helping no one, and dragging everyone down. But Meredith has finally booted him for the sake of their two sons. So count her surprised when Walter shows back up at home the next day after a drunken hotel bender and a bit of dumpster diving. Strangely, ensconced on his arm is a mangy beaver puppet who starts talking instead of Walter. Talk to the hand, The Beaver basically says… Walter has retreated and won’t be speaking for himself anymore.

Oddly though, The Beaver is a sassy talker who sounds more than a little like a brazen, cockney Michael Caine. The Beaver even shows up at work, where Walter is a CEO of a crumbling toy company because of his years of apathy. Walter’s co-workers are curious and a bit bemused, but heck, why not go along with it… this is the most interesting their boss has been in years.

Even Meredith is initially embracing of the idea, even though Walter’s former dynamic self is a bit filtered in his new… uh… persona. There are some genuinely funny scenes where Meredith is creeped out by The Beaver being constantly present for their, um, intimacies. The couple’s older son (Anton Yelchin) is appalled by his father’s stunt, and has retreated into a friendship with a loner cheerleader (Jennifer Lawrence). But their young son enjoys the new puppet-presence (as well as at least the physical return of his father), and that is enough for Meredith… for a while at least.

But around the halfway point, The Beaver starts to take itself seriously. The reason that it manages this tricky transition is entirely because of an extremely well-acted and heartbreaking moment where Meredith and Walter stumble through what should have been a nice anniversary dinner. Things turn out poorly, and Walter’s forlorn and desperate personality starts to emerge again, clashing with the aggressively dominant Beaver. From there, the story takes a very dark path.

The Beaver is a strange movie, from its ripe-for-jokes title, to its bizarre premise. Apparently the script, by first time screenwriter Kyle Killen, was voted the best unproduced screenplay floating around Hollywood in 2008. The story also profiles clinical depression, an uncomfortable topic which has been handled many times in films, though not always effectively. Director Jodie Foster gives the story a steady hand, though the screenplay itself falters a bit when focusing on the teenage son’s problems (meant as a generational parallel to his father’s).

The movie works best, however, when Mel is unleashed. This will not be surprising for those who remember Mel Gibson the actor vs. Mel Gibson the Media Train Wreck. For all practical purposes, Mel is playing two distinct characters who end up fighting for the soul of one broken man. It is a tricky role, and is rather fascinating—and sad—to watch unravel. The Beaver‘s biggest selling point, Mel Gibson’s performance, unfortunately is also the toughest selling point, considering a portion of the audience will stay away because of him. And that’s too bad, because this film reminded me that he is really a fine actor.