Believe the hype: this movie is wonderful.
By Vickieon August 15, 2013
0 Comments
Our Rating 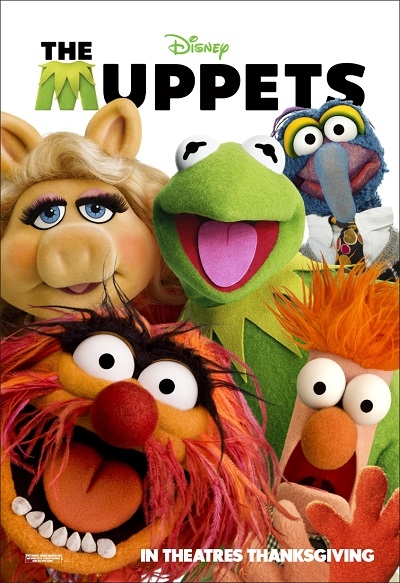 It’s as good as it looks and, more importantly, even better than you hope it’ll be. Like the kooky, colorful characters at its core, it’s simultaneously sweet, funny, silly, sentimental and totally huggable.

Combining nostalgia, goofy humor and clever meta-esque asides, the film finds Muppet-superfan brothers Gary (Jason Segel) and Walter embarking on a trip to Hollywood to visit the famed Muppet Studios. Also on the journey is Gary’s winsome girlfriend, Mary (Amy Adams), who’s really hoping her benevolent beau gets his act together and commits to their relationship. Once the traveling trio arrive in Tinseltown, however, they’re horrified to see the Studios in ruin, and even more panicked when they discover ruthless tycoon Tex Richman (Chris Cooper) is preparing to tear the whole place down so he can drill for oil on the property.

Faster than you can say “manamana!”, our heroes track down Kermit and enlist his aid in reuniting all the Muppets for a massive, last-ditch telethon to raise $10 million so they can buy back the Studios. One by one, our beloved felt-faced friends are scooped up from their post-Muppet Show lives – Fozzie’s working a lounge act in Vegas, Gonzo’s become a plumbing magnate, Animal is in anger-management classes with Jack Black (as himself), and Miss Piggy, ever the fashionista, is living in Paris – and brought together to (they hope) put together one final extravaganza.

Like every Muppet project before it, this one is liberally sprinkled with celebrity cameos, including (but not limited to) appearances by Whoopi Goldberg, Alan Arkin, Zach Galifianakis, Jim Parsons, Ken Jeong, Neil Patrick Harris, John Krasinski, Sarah Silverman and Emily Blunt. Watching the movie and waiting to see who might pop up next was more fun than I’d like to admit, actually.

And, really, so was the whole movie. I was smiling from the opening frames through to the closing credits. That is, when I wasn’t crying – adults who grew up watching Kermit and company will no doubt have their heartstrings duly tugged repeatedly, and anyone who doesn’t get all teary when the world’s most famous frog breaks out “Rainbow Connection” is a person I don’t want to know. Kids, meanwhile, will no doubt get a kick out of the slapstick humor and wild antics of the folks – human and otherwise – onscreen.

The songs, and there are a few, are all catchy and hook-y and blend seamlessly (often hilariously) into the action, and the story bounces along brilliantly. Though I was skeptical about Segel – especially since he produced the picture and might potentially sully my beloved Muppets with some kind of Judd Apatow-inspired undertones – he kept the proceedings in decidedly G-rated territory and I actually found him oafishly lovable. Adams, who’s mined this territory before in Enchanted, is a perfectly plucky gal next door, and little Walter – a brand new Muppet – is, weirdly, entirely believable as Gary’s brother. The fact that I could so easily suspend my disbelief is a testament to how engaging the characters and the movie are. Oh, and if you’ve ever wondered what it would be like if Chris Cooper busted out a rap song, you’ll wonder no more after seeing this.

Truly, I can’t say enough good things about The Muppets. As I watched it, I kept thinking, `What is there NOT to love about this movie?!’

And now I know the answer: nothing.