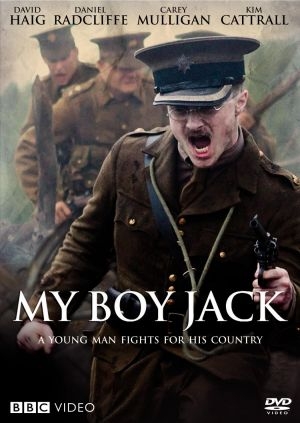 Young Harry Potter gets to stretch his legs in this made-for-TV historical drama, and redeems himself quite nicely, I must say. In fact, except for the initial jolt of recognition when he first appears on-screen, I found that Daniel Radcliffe disappeared immediately to be replaced by young John Kipling, son of the famous author Rudyard Kipling.

The year is 1915, and Kipling senior (David Haig) is using his celebrity to make rousing pro-war speeches to attentive British audiences who are already on edge, fearing the swelling German army’s growing aggressiveness. By God, every young man better be good and ready to volunteer to protect the United Kingdom; it is only a matter of time! His rah-rah attitude thunders around at home as well, where his 17-year-old son Jack (Radcliffe) gets the brunt of the brouhaha jingoism. Jack can’t help but want to volunteer for the Navy as soon as possible—to serve his country, of course—but also maybe to get away from his family. But, alas, Jack’s eyesight is wretched, and he is rejected multiple times after failing the eye test. Anyone can relate to Jack’s humiliation as he has to tell his dad, again and again, that he didn’t get into the military branch of choice. Dad says he will pull some strings, write some letters, talk to the right people to help him out—but Jack wants to get in on his own merits.

Luckily (supposedly) for all, the war begins, and Great Britain’s King George V needs all the young men that he can get to volunteer to serve. Jack’s eyes aren’t suddenly better, but the Army takes him anyway for officer training. Before you can say, “Ten, hut!” Jack is leading a platoon of Irish Brigadiers, and they are being sent to the frontline at the brutal Battle of Loos in France, where Jack will go into his first battle a day after his 18th birthday.

My Boy Jack isn’t entirely the story of Jack, but it also fully portrays a family keeping up their optimism on the home front. Rudyard trumpets that he would be over there fighting if he was a young man, but the truth is, he had never even served in the military. Mom Carrie (Kim Cattrall) tries to stay supportive of her blowhard husband, but is also extremely worried about her son, and sister Elsie (Carey Mulligan) is terrified that she will lose her best friend, her beloved brother. When a telegram arrives stating that Jack has gone missing, it becomes a waiting game as the family struggles to find out news… any news.

David Haig, the actor who plays Rudyard Kipling, was told as a young man that he was the spitting image of the author. He jokingly states in the extras that it was only a matter of time before he starred as Kipling, so in the meantime he wrote this play—which eventually became this screenplay—for himself to star in. The film is partially filmed at the actual Kipling house, and though some historical facts are tweaked a bit, the story sticks pretty close to the true horror that one family faced in World War I. Much is made of the fact that the Kiplings were an exceptional family, with dad hanging out with King George and all, but when faced with war, they have as much to lose as anyone. My Boy Jack is an effective film that shows both the often necessity of war, but also the huge sacrifices that result.