Shutter Island is a fascinating mess. Sure it is uneven—sometimes boring, sometimes thrilling, and sometimes a head-scratcher. But with Scorsese at the helm, at least it is (almost) always interesting.
By Lindaon December 21, 2013
0 Comments
Our Rating 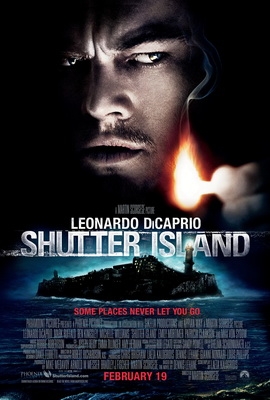 Almost from the opening frames, I couldn’t help but notice that Shutter Island oozes with style. From the booming Hitchcockian soundtrack to the arty and transfixing flashbacks, you can tell right away that this tale isn’t being conducted by a director-for-hire. That said, the plot balances on a thin line between a masterpiece thriller and one of those schlocky throwaway popcorn movies with the twist at the end that the audience can see a mile away.

Leonardo DiCaprio, constantly scowling with suspicion (and an occasional migraine), plays Teddy Daniels, a U.S. Marshall in the early 1950s. It is post World War II, and society seems in flux. Teddy is one of those young driven men of the new America, who poorly hides the fact that he is completely messed up. He is still reeling from the loss of his beautiful young wife (Michelle Williams) in an apartment fire, and is also chasing demons and visions that haunt him from the war.

But Teddy, along with his U.S. Marshall partner Chuck (Mark Ruffalo), has a job to do. They’ve been dropped off at Shutter Island, a remote rocky outpost that is home to an asylum for the criminally insane. A woman inmate has disappeared, and despite her appearance as a sweet domestic housewife, she is extremely dangerous, having drowned her own three children in a lake.

It quickly becomes clear, however, that Shutter Island is one of those places where you can check out anytime you like, but you can never leave. There is nowhere for this woman to run to, and Teddy and his buddy start to believe that there is something more suspicious and sinister going on… especially when the head doctors are led by the types of Ben Kingsley and Max Von Sydow.

Shutter Island is long, and feels long. At two and a quarter hours, it could (and should) clip along, but it really doesn’t. It veers from being a thriller to a troubling psychological drama, then it veers back again, often with wobbly uneven pacing. Some characters are cartoonishly sinister, and are planted to arouse the utmost suspicion, plus there are neon flashing arrows that point to a big revelatory showdown by the end. But to counter the obviousness, there will suddenly be a surprisingly moving scene to jar you out of your cynicism (props to Leo for shaking my composure with one of his scenes towards the end). What the heck is going on with this movie?

When you have Martin Scorsese directing, and players like DiCaprio and Ruffalo as leads, and bit parts filled by skilled folks like Jackie Earle Haley and Emily Mortimer, it can’t be denied that the movie is always… interesting. Even as I shifted in my seat, a little bit restless, I was still curious. Heck, Patricia Clarkson shows up for one scene that seems to go on and on. But as I sat there tapping my watch, I noticed that everyone else in the theater was having the same response as I—even as we sat there wriggling, Clarkson had us all in her grasp.

And that is how I felt about the movie as a whole. I heard mutterings of “Hated it!” and “Boring!” as I left the theater, but Shutter Island still held my interest enough where I just couldn’t quite shake it off.