This is a fitting swan song for our beloved hero, and it goes a long way to make up for the depressing mediocrity of the last installment.
By Jenniferon December 27, 2014
0 Comments
Our Rating 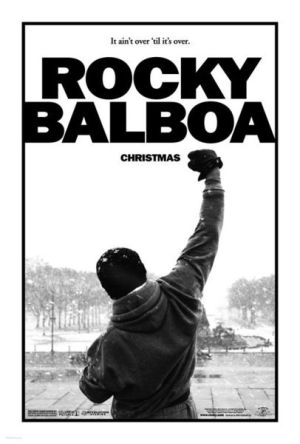 As Rocky movies go, Rocky Balboa is most like Rocky II. You wind up laughing at parts of it, but also find yourself genuinely moved by it. Though it’s impossible to recapture the magic of the original, this is a fitting swan song for our beloved hero, and it goes a long way to make up for the depressing mediocrity of the last installment.

As he approaches his sixties, Rocky has come to a crossroad in his life. His son has grown up and started a career in business, and he has lost his beloved Adrian to “woman cancer”. Somewhat adrift, Rocky spends his days living in the past, immersed in memories of his precious wife. He visits her grave so regularly that he keeps a folding chair hidden in the branches of a tree at the cemetery. The sadness he exudes is so overwhelming that bearing its weight could easily account for Rocky’s amazing muscles. He looks as though he’s about to burst into tears at any time, but even when he does, the heaviness remains. Honestly, this has to be one of the greatest love stories ever committed to film. How will Rocky go on without her?

Despite all of life’s ups and downs, Rocky has changed very little. He still keeps two turtles as pets (wait, is that actually Cuff and Link?), and he’s still deeply rooted in the old neighborhood. Though he lives in a modest inner-city home, Rocky seems to have overcome his financial difficulties by opening a restaurant, appropriately named Adrian’s. There he recounts his glory days (occasionally to Frank Stallone) and poses for pictures with fans, but it’s all rather hollow. Rocky is becoming a shell of a person.

The tide slowly begins to turn when Rocky runs into an old acquaintance. Remember little Marie from the original Rocky? How he walked her home and told her not to swear and run around with boys or people would call her (“and I’m gonna use a bad word here”) a whore? Well she remembers too, even though she’s all grown up with a son of her own. Just as he did when she was a foul-mouthed kid, Rocky begins looking out for Marie. He does little things to ensure her safety, like whipping out a replacement bulb for her porch light on his second visit to her run-down tenement. He gets her a job at his restaurant and takes her son under his wing—all in the spirit of friendship. Rocky is someone who wants the best for people, but he makes it clear that he’s still very much married to Adrian. There are no ulterior motives whatsoever. Sigh. What wouldn’t I give to be little Marie?

When computer simulations suggest that Rocky could have beaten current heavyweight, Mason “The Line” Dixon (Anthony Tarver), an exhibition is planned. With the support of Marie, Paulie, Rocky Jr. (Milo Ventimiglia), and faithful corner man, Duke (Tony Burton), Rocky begins training again. He knows it’s an uphill battle, but it gives shape to his life, and more importantly, it makes him feel alive. He lifts weights, hurls kegs, and runs with his new old dog, even lifting Punchy the pooch over his head on the steps of the Philadelphia Museum of Art. Apparently Sylvester wanted to do that with Butkus in the first movie, but the dog was just too heavy. Everything comes full circle in Rocky Balboa, and the movie deserves major props for maintaining the continuity of the series. No detail is forgotten, and even Bill Conti returns to give us a classic Rocky score.

Every aspect of Rocky Balboa is bittersweet, but the film is a testament to the strength of the human spirit. As Rocky says, “it ain’t how hard you hit; it’s about how hard you can get hit, and keep moving forward.” He has proved himself again and again, and remains a truly inspirational figure in pop culture. Rocky Balboa may have its faults, but every once in awhile its nice to revisit something familiar. These movies have been dropping around our shoulders like warm blankets for so many years that’s hard to let him go.