Though the Rocky franchise has been cheapened by endless sequels, the original was truly the little movie that could.
By Jenniferon December 27, 2014
0 Comments
Our Rating 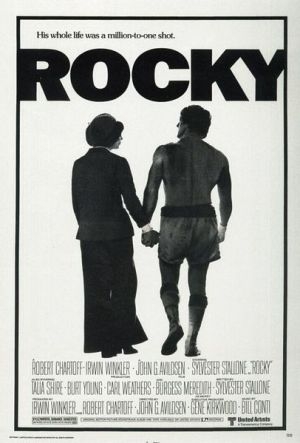 Rocky is a film so iconic, so ingrained into our collective consciousness that it feels like we’ve seen it whether we have or not. Who doesn’t recognize the classic theme song “Gonna Fly Now”, know the origin of “Yo Adrian!”, or remember Rocky’s triumphant run up the steps at Philadelphia’s Museum of Art? Just because we are familiar with its parts, doesn’t mean we should dismiss the film as a whole.

As he approaches his thirties, Rocky Balboa (Sylvester Stallone) is nearing the end of his boxing career. His trainer, Mickey (Burgess Meredith), is disappointed in Rocky’s lack of focus, and he’s not going to waste any more time on him. That’s great for Mickey, but without boxing, what has Rocky got? He works as a loan collector to pay the bills, but he’s not interested in roughing people up outside of the ring. Aside from a stinky apartment, two turtles (Cuff and Link), and a goldfish named Moby Dick, Rocky doesn’t have much to call his own.

It’s fitting then, that Rocky falls for Adrian (Talia Shire), a frumpy pet store clerk who has never flirted with anything but spinsterhood. She’s the sister of Rocky’s best friend, Paulie (Burt Young), and like Rocky, she’s been told that she’s past her prime. Though Paulie claims he gave up his own life to take care of her, he keeps Adrian so downtrodden that it’s ridiculous to expect that things will ever change. How is she supposed to shine when Paulie is constantly calling her a loser or screaming at her to enjoy her life? Yeah Paulie, I’m sure she’ll get right on that. Right after she finishes crying. Even Adrian’s mother advised her to develop her brain because she wasn’t much of a bod.

Only Rocky sees that Adrian is just a shy girl to whom youth has been unkind. He is undaunted when his sleazy boss laughs at his date with the “retard” and recommends that he take her to the zoo. Instead, he continues his gentle but determined courtship, visiting Adrian at the pet store, telling jokes, and ultimately taking her skating after one of Paulie’s outbursts. What does he see in her? They fill gaps. She’s shy, he’s dumb: together they make sense.

When Rocky finally gets Adrian back to his apartment, she’s so skittish she looks like she’s ready to climb the wall, and it’s not just because the place is such a dump. Surely any man who says she’s pretty is just making fun, and good girls don’t go home with men they barely know. Rocky approaches carefully. “I’m going to kiss you,” he says, “but you don’t have to kiss me back.” As he tenderly kisses her cheek, Adrian finally begins to believe. Watching them fall to the floor in each other’s arms makes you want to laugh, cry, and cheer all at once. Theirs is a true love story, and that first kiss is easily a thousand times hotter than any sex scene.

As Rocky’s personal life begins to look up, he is given a last chance at glory in the boxing ring. He is handpicked by reigning heavyweight champion, Apollo Creed (Carl Weathers), for a fight intended as an elaborate publicity stunt. People will see that Apollo is down with the people, but they will also see that he is a champ. Of course, Rocky doesn’t see himself as a tool. He intends to win this match and take the championship for himself.

With the help of Mickey and Paulie, Rocky launches into a rigorous training program. Watching him build himself up to the tune of “Gonna Fly Now” is enough to make anyone want to get up and fight, and by the time he’s in the ring with Apollo, you’re ready to get in there with him. Get up, Rocky! Get up! You can go the distance! His face begins to look more and more like meat. Brain damage, blindness, and death are imminent, but somehow he just has to make it through all fifteen rounds. He’s not the only one who will never recover if he doesn’t.

Though the Rocky franchise has been cheapened by endless sequels, the original was truly the little movie that could. This heartfelt underdog story is nothing short of inspiring. It’s no wonder the movie paralleled the success of its title character and became a champ at the 1976 Oscars as well.

In addition to its sleek, hi-def picture, the 2011 Blu-Ray edition of Rocky comes with a nifty booklet built into the cover.  Though the disc lacks extra features, the booklet is packed with trivia and pictures, making for a nice collector’s piece.