13 Going on 30 proves that wishes do come true. 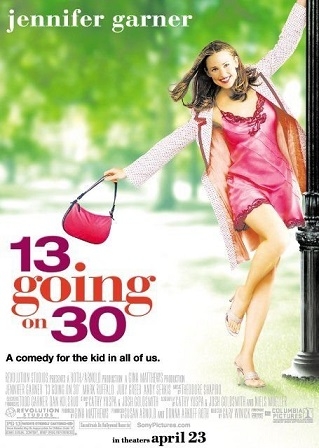 13 Going on 30 proves that wishes do come true. First, it granted my wish that movies could be as good as they were in the 80s—and then it went and exceeded my expectations! It isn’t just set in the 80s like The Wedding Singer, and it doesn’t try to feel like an 80s movie like Never Been Kissed; it actually has all the elements that made 80s movies great. It’s got a positive storyline, a big soundtrack (including Madonna, Whitney, Belinda, and Pat), romance, and pink Converse high tops. Plus, with the advantage of retrospect and subtle prop placement, this movie incorporates all the fads we took for granted—think Fruit Roll-ups, Cabbage Patch Kids, sweaters with puffy sleeves —to recreate the universal experience of an 80s childhood. I sat and smiled at the screen like a dope for the entire duration of the film.

Jennifer Garner stars as Jenna Rink, a frustrated thirteen-year-old girl who wishes she could be “thirty, flirty, and thriving” and wakes up to find that her wish had come true. Sound unbelievable? The boy next door gave her wishing dust for her birthday, and I, for one, am inclined to accept that wishing dust can solve any problems this might logically be created in the time-space continuum. After coming to terms with her new body and adult life, Jenna begins to realize that her thirty-year-old self is not someone she likes very well, much less someone whom she wants to be. She discovers that her dream of being cool has come with a price. She has become estranged from her family, her best friend, and perhaps worst of all, her true self.

Watching Jenna set things right in her life is a fun and inspiring experience, made even more enjoyable by the movie’s great cast. Jennifer Garner’s portrayal of a kid suddenly stuck in an adult body is funny and refreshing. She makes you wonder if we wouldn’t all be a little more authentic if we’d maintained the dorkiness and spunk of our thirteen-year-old selves. Mark Ruffalo endearingly plays the grown up version of the boy next door, who might just turn out to be the love of Jenna’s life. And free of his Gollum “gimp suit”, Andy Serkis is free to be his funny, charming best.

In short, this movie brings out the best in everybody, including the audience. As we left the theater, my friend said exactly what I was thinking: “I feel like trying on clothes”. It’s the same feeling I get every time I watch Pretty in Pink—almost a sense of empowerment that makes me want to be a better version of myself. It’s been a long time since a movie made me feel like that. Though 13 Going on 30 bears no resemblance to a John Hughes movie in terms of plot, the emotional resonance of the film is similar. Jennifer Garner has the same regular girl qualities as 80s heroine Molly Ringwald: she’s the sort of girl you’d want as a friend, maybe even the sort of girl you’d want to be.