If you want to purchase just one movie from the Rocky series, this one captures it all.
By Jenniferon December 27, 2014
0 Comments
Our Rating 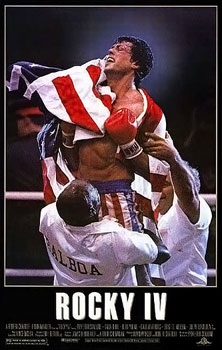 Rocky IV embodies the best and worst qualities of the Rocky series. As such, it’s as fun to make fun of as it is genuinely enjoyable. The movie is wrapped around the soundtrack like an elaborate music video, but with songs this good and villains this bad, it’s impossible not to get caught up in the action. What it lacks in substance, Rocky IV makes up in scale. As they say in Scarface, “Nothing exceeds like excess.”

After his win against Clubber Lang, Rocky truly has it all. His family is happy, and they’re so wealthy they make Richie Rich look like a schmo. After all, did Richie Rich ever have a robot that could serve birthday cake, bring you the phone, and pump out cool 80’s music? I think not. Rocky’s only lament is that with the glory days behind him, he’s becoming a regular person.

All of this changes when Soviet powerhouse Ivan Drago (Dolph Lundgren) challenges Rocky to a fight on national television. Apollo sees the challenge as he’s watching T.V. in the pool, then hightails it to Rocky’s house. He’s got the brilliant idea to fight Drago first, and orchestrates the show of shows. Remember the crazy display of patriotism at the original fight in Rocky ? Well multiply it tenfold, and you’ve got a pretty good idea of what you’re about to see.

Torn, Rocky climbs into his sports car and reflects upon his life as “No Easy Way Out” by Robert Tepper blares from the stereo. Through flashbacks, we relive Adrian and Rocky’s first kiss, the birth of Rocky Jr., various runs up the museum steps, and lots of fun with Apollo. If you want to purchase just one movie from the Rocky series, this one captures it all.

You can probably guess that all this rumination leads Rocky to pack up Paulie and head to Siberia. He must take a stand for Apollo’s sake! Once there, he carries logs while walking through knee-deep snow, pulls a sleigh like a demented sled dog, does crazy full-body sit-ups, climbs a mountain, and grows a beard. Even his hired minders in their fancy car can’t keep up with him. Meanwhile Drago trains at a bizarre government facility like some sort of lab rat. His punches are calibrated by machine, and clock in at thousands of pounds. He may be a giant, but we know the man will win, especially with Adrian by his side.

On the night of the fight, Ivan Drago steps into the ring wearing a disgusting black mouthguard, and declaring, “If he dies, he dies.” Staring Rocky in the face, he hisses, “I must break you.” Ew! Not even, “I will break you” or “I want to break you,” but “I must”, like before I do anything else at all. He’s taller, and his reach is longer, but he’s just fighting. Rocky is standing up for his fallen friend, for the United States, for the common man, for all that is just and good. Soon even the Soviet people are chanting his name, much to the chagrin of Mrs. Drago. Apparently people will always root for a hardworking, pure-hearted underdog regardless of nationality – especially when he’s this good-looking and brings along such excellent American music.