Rocky V is easily the weakest of the Rocky films, but it also captures the qualities we love most in Rocky—sheer vulnerability wrapped in hard muscle.
By Jenniferon December 27, 2014
0 Comments
Our Rating 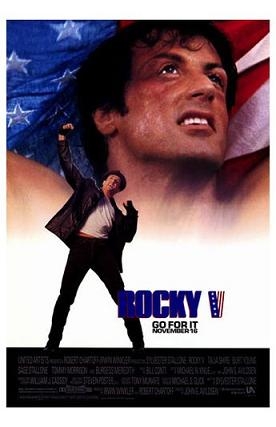 After reliving the fight against Ivan Drago, we meet up with Rocky in the locker room. He’s showering by himself, and can’t seem to stop shaking. Finally he sits down on a bench, and sends for Adrian. Drifting in and out of coherence, occasionally calling Adrian “Mick”, he says he feels like something broke inside. Oh dear, it seems that Rocky finally took one too many blows to the head, but he certainly looks good all naked and broken down. I practically had drool running down my chin after the first scene, but it’s all downhill from there.

When they return to The States, Rocky Jr. (Sage Stallone) immediately asks, “Do you think there’s something wrong with Dad?” His jokes are even more half-witted, and he seems a little retarded in general. It’s not long before he’s officially diagnosed with brain damage and forbidden to fight. Adrian keeps announcing his retirement, but Rocky is torn. Fighting is all he knows, and a deranged promoter is desperate to ride his U.S.S.R. victory all the way to the bank.

Making matters worse, Paulie accidentally gave power of attorney to their crooked accountant, and all of their savings are gone. Though they paid cash for their lavish home, it seems that someone repeatedly forgot to pay the taxes. Could this little development be any more annoying? I’m sure Adrian would have been really good at managing their money, but apparently the Balboas thought it was ghetto to balance their own checkbook. All that’s left is the gym Mickey willed to Rocky, so back to the ghetto they will go.

Somehow Rocky never knew about the inheritance, and it leaves him all weepy and nostalgic for Mickey. He becomes obsessed with the idea of mentoring young talent like Mickey did, and soon finds the perfect pupil in Tommy Gunn, a lunkhead from the Midwest who has looked up to Rocky since he was a kid. Meanwhile, Adrian has gone back to work at the pet store, and Rocky Jr. (now about thirteen) is attempting to adjust to life in a tough inner-city school. Kids are always pounding on him and stealing his stuff, but when Rocky Jr. turns to his father for guidance, Tommy gets in the way.

Rocky pours all of his energy into his prodigy, adopting him as a son, a brother, and a second self. Unbeknownst to him, the crazy promoter has set his sights on Tommy, making all sorts of promises, and dogging him to sign a contract. Poor dumb Rocky can’t even comprehend the fact that Tommy might be using him—after all, they’re supposed to be as close as two crossed fingers. Maybe he assumes that his own son doesn’t need him because he’s such a smart kid, but this is a poor excuse for investing everything in Tommy Gunn. Everyone wants a father.

When Rocky finally sees the light, he’s lost another lucrative opportunity, and must scramble to make amends with Rocky Jr. As he apologizes to his son, confessing that he forgets things all the time, and was no whiz to begin with, his good heart shines through. We see the innocence and sincerity we have come to know and love, but it is only a fleeting glimpse.

Soon Rocky is facing Tommy Gunn and the insane promoter at a bar. They’re packing T.V. cameras, and challenging Rocky to a fight. “This ain’t no pie eating contest,” announces Rocky, and the next thing you know, the two are sparring in the street. You can pretty much guess who wins, but to what end? The fight makes about as much sense as the showdown against Hulk Hogan, and leaves you wondering if Rocky wasn’t the only one suffering brain-damage when it came to making this movie.