If you’ve read enough of my rantings, you may have noticed that Bill Paxton hovers very close to the top of my List o’ Least Favorite Actors. His blinking-like-a-slow-possum acting technique never seemed to vary, from his “Tell us a story, Rose” monotone modern captain in Titanic, to the twister-chaser in Twister. His flat delivery made me grind my teeth.
By Lindaon October 12, 2013
0 Comments
Our Rating 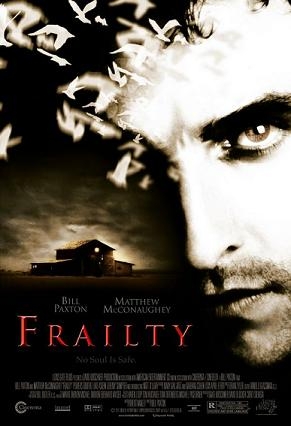 So, though I never thought it possible, Bill Paxton may have single-handedly redeemed himself with this one film.

The best thriller of the year that nobody went to see, Frailty is not only a Southern Gothic horror film, a freaky-as-hell nail-biter, and a super-twisty mystery that works, but it is one of the few films about religious freaks that shows the perspective of the fellow who is acting on the word of the Almighty himself.

The film begins with a shifty man, played by Matthew McConaughey, going into an FBI office to speak with an agent about the unsolved God’s Hand murders. He claims to know who the murderer is. It’s his brother. And it all started with their dad. Yeah? Prove it.

Thus begins the flashback and flashforward storytelling technique that keeps you guessing about what the hell is going on until literally the final scenes of the film.

Flashback to the 70s, where we meet Bill Paxton as “Dad”, a single working class guy raising two boys, Fenton and Adam (strongly played by Matt O’Leary and Jeremy Sumpter, respectively, who both must be emotionally scarred after this film). One night, Dad gets a message from God that it is his family’s duty to rid the world of “demons”. But these demons happen to be disguised as humans, and must be “destroyed”. Yep, you can see where this is going.

I don’t want to divulge more, as part of the the pleasure of seeing a thriller is being surprised. Let’s just say, during several parts of the film, I had to turn away from the screen and close my eyes, while during other parts, I was practically gnawing off my paw in anxiety. And pay attention, as things slowly start to add up to the the knock-you-over-the-head climax—the type of ending that makes you immediately want to go back and watch certain scenes again.

Bill, I’m sorry that I avoided this film in the theaters because it had your name on it. I’m sorry that it was probably mis-advertised and wasn’t the box office hit it deserved to be. The least I can do is praise your film on my site, and hope that it incites at least a few readers to run out and rent your flick. And Bill, I promise that next time you direct a film, by gosh, I’ll be paying attention.