Snow White and the Seven Dwarfs

Despite any warts, this classic remains classic.
By Jenniferon December 27, 2014
0 Comments
Our Rating 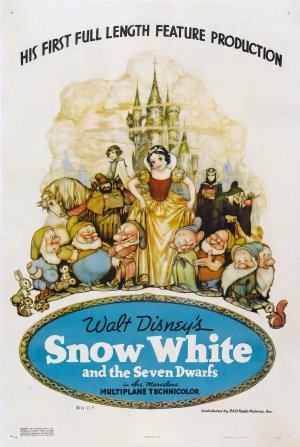 Of all the Disney classics, Snow White and the Seven Dwarfs has to be one of the hardest to dissect from a critical perspective. As Disney’s first feature length animated film, it is an undeniable feat in film history. The animation itself is beautifully done, completely charming, and every bit impressive as it was in 1937. The film captures a beloved Grimm fairy tale in a way that can only be described as iconic. But (and you knew there would be a “but”), when you think about it, the whole thing is kind of twisted and annoying.

To begin with, there’s Snow White’s voice. Even though she’s kind, lovely, and likes to spend her afternoons twirling around the fountain singing about her prince, a little of that high warble goes a very long way. And then she starts speaking in this sort of breathy, wide-eyed, baby voice, and you think to yourself, “wow, there might definitely be a limit to how long I can listen to this.”

Early on, you may also begin to wonder about Snow White’s intelligence, but doing so is mean and irrelevant. It doesn’t matter whether Snow White is a genius or a simpleton – the evil Queen is so threatened by her beauty that she hires a hit man to take her out. But like all good cleaners, this hulking, ominous woodsman has a “no women, no kids” policy, and he reveals the whole dark plot to Snow White, telling her to run away and never come out again. Frankly this is the hottest moment in the whole movie, but silly Snow White runs pell-mell into the forest all hysterical and blind to the fact she’s just had a Prince Charming moment with a killer.

This, of course, leads her to the home of the Seven Dwarfs, a backward little troupe of men who live in a slovenly cottage and eat off dirty dishes. Clearly they are in need of a woman’s touch, and so Snow White makes her home with them, cooking and cleaning her days away in the manner of a benevolent fairy godmother. Naturally she is loved by the dwarfs and the woodland creatures alike, but their perfect happiness can’t last forever. Soon enough the evil Queen finds her and poisons her. It’s not enough to banish the poor girl: Snow White’s very existence is an assault to the Queen’s ego. Too bad she’s still the haggiest hag in town even with Snow White out of the picture, and Snow White’s friends happily shove the old bat off the edge of a cliff. Do you love it?

Then we have the silly business of Snow White laying in a glass coffin (?!) under the “eternal” watch of her woodland friends. Except that “eternity” must only amount to a year or so, because when Prince Charming finally comes along, he hasn’t aged a day. He brings Snow White back to life with true love’s reviving kiss, and everyone lives happily ever after.

It’s almost stunning how dark the story is when you come right down to it, but there’s some solace in the fact that innocence is protected and goodness prevails. Though times may have changed since such passive heroines graced the big screen, Snow White will undoubtedly be loved and remembered for generations to come. Cheerful renditions of “Heigh-Ho” and “Whistle While You Work” will be familiar even to those who have never seen the movie, and the visual appeal of the film unquestionably stands the test of time. Despite any warts, this classic remains classic.

The Snow White Diamond Edition DVD and Blu-Ray combo pack has many of the same extras as the previous 2001 Platinum Edition DVD release, but manages to cram in a whole lot more. Of course with Blu-Ray, you now have the gorgeous restored picture, plus 7.1 Digital Theater System Hi-Def Surround Sound. Some things have changed, like instead of Barbra Streisand singing “Someday My Prince Will Come”, the kids can now see a video of Tiffany Thornton instead (somehow I think Barbra is a little classier). This kind of change reflects the differences between the Platinum and Diamond editions: Platinum has a whole disc of extras that adults would appreciate more (and miss), like vintage radio spots and trailers, footage from the premiere, scrapbooks, etc., while this Diamond Edition boasts more kiddie-friendly stuff like “Disney Family Play” games, “Heigh Ho” karaoke and Disney’s Wild Mine Ride (both of which were included on the previous release, for instance), and other kid entertainment. In addition, the set is bloated with tons of other mini-featurettes about music, animation departments, character design, etc. Even though the Platinum Edition was excellent, Disney is betting that you are dying for the Blu-Ray and a pile of new goodies, so do what you will, those of you that simply can’t get enough!