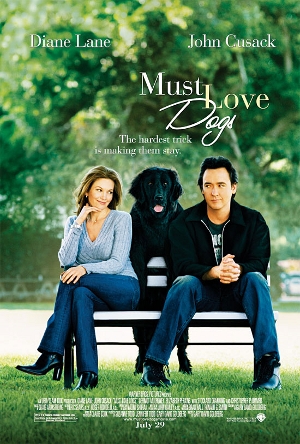 I should have known better than to get all excited about Must Love Dogs, but I always lose my wits when Christopher Plummer factors into the deal. He’s the reason I ignored several warning signs, including a heads up to Diane Lane calling someone a stupidhead at some point in the movie (shudder). The romantic comedy is truly bordering on extinction, and Diane Lane and John Cusack have burned me before. Their recent films have been like cheap chocolate bunnies—they look good and taste sweet, but inside they’re all hollow.

Must Love Dogs is a fairly benign movie on the surface, but the more I think about it, the more annoyed I get. We meet up with Sarah (Diane Lane) after she has been divorced for a whopping 8 months. At this point, her entire meddlesome Irish-American family stages an intervention to get her back on the market. Sarah is sad and mopey, but uncertain about dating again. Her sister (Elizabeth Perkins) takes care of this by placing an Internet personal ad on her behalf. Pretty soon she’s got all sorts of creepy dates lined up, including one with her father (Christopher Plummer). Oopsie! Isn’t that funny?! Couldn’t you just die?! Actually, I’m not sure that is the funniest story ever told. I’m not even sure it made any sense—Sarah’s picture is online.

Luckily, one of Sarah’s bad dates shows potential. Jake (John Cusack) is a fellow divorcee who just wants to take some time to recover from his broken heart, but his pushy, obnoxious friend pressures him into dating again. He and Sarah could clearly build something out of their awkward date at the dog park (with borrowed dogs, I might add), but we wouldn’t have a movie if something didn’t keep them apart.

Here’s the weird part—for someone who supposedly can’t meet anyone, Sarah doesn’t have much trouble getting involved with Bobby (Dermot Mulroney), the father one of her preschool students. Of dubious hotness and questionable character, he only serves to gum up the works for Sarah. But she’s desperate, because she hasn’t had sex in SO long, and everywhere she goes, someone rubs in the fact that she’s alone. Even the man at the meat counter has it in for her—offering dating advice and specials on (gasp!) whole chickens! Everyone knows that divorced people only eat one piece of chicken at a time, alone, over the sink. Extra chicken could very well induce suicide.

Am I alone in thinking that this is so annoying? How depressing that this supposedly fabulous woman cannot have a fulfilling life without a man. Why can’t she get the dog she’s always wanting? Why can’t she have dinner at the table, or at least on the couch? She’s got a nice house, plenty of friends, and one would think that eventually the business of meeting someone would take care of itself.

But nooo, she messes around with Bobby, which causes a misunderstanding with Jake, and then we’re left with the oldest plot device in the book: two people who are meant to be together, but cannot be together because of some stupid failure in communication. It’s An Affair To Remember all over again. It drives me insane when people won’t tell each other the most obvious things like, “Oh hey, I really like you, and I’m not actually going out with that other guy” or “Oh hey, I’m in a wheelchair now, so I don’t know if I’ll be able to make it to the top of the Empire State building.”

Diane Lane and John Cusack are both likable enough in Must Love Dogs, but the movie is beneath their intelligence. It’s beneath Christopher Plummer too, but it seems you can put him in just about anything, and he’ll come out with his dignity intact. As the patriarch of this loud and unruly family, he’s funny, kind, and understanding. He’s always quoting poems and offering eloquent advice, and even though he winds up dating about four women at once (as in all together, at the same event) somehow he’s not reduced to a dirty old man. In fact, he’s just about the only thing to love about Must Love Dogs.