If big business can slip carcinogens into our homes with a word as benign as “fragrance”, then we have a right to know about this Stink!.
By Jenniferon July 12, 2016
0 Comments
Our Rating 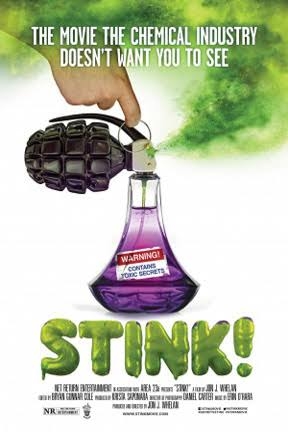 We’re all familiar with that “new” smell that accompanies Christmas morning, a birthday, or a big shopping trip. In some ways it evokes positive feelings of presents and shiny new things, but deep down, we all know that smell is chemicals. After his daughters receive some particularly stinky new pajamas from the tween chain store Justice, John Whelan is inspired to ask exactly what chemicals are producing that smell. His documentary Stink! proves that the answer is just as offensive as the odor itself.

We all know that no one is going to advertise the chemicals that coat new clothes or that comprise a specific fragrance, but you would think that if you approached a company for that information, they’d be compelled to tell you. Nope! The specific ingredients are considered a trade secret proprietary to that manufacturer. That means companies don’t have to disclose their ingredients to consumers, but it also allows them to manufacture items without revealing the chemical content to regulatory agencies. Any time you see the word “fragrance” printed on a list of ingredients, a whole host of unexpected, possibly carcinogenic chemicals may be represented. If you happen to be allergic to one of these components, like the young man who goes into anaphylactic shock when exposed to Axe Body Spray, well, good luck figuring out which one is the problem.

As Stink delves deeper into how and why companies are allowed to get away with this practice, it becomes depressingly evident that government favors the rights of businesses over the rights of consumers. As Whelan presses lawmakers, scientists, and companies for answers, only scientists are consistently candid in their responses. Lab analysis can reveal which chemicals lurk in which products, and studies have shown which chemicals can cause cancer, disrupt hormones, or cause other unwanted health effects. Why then, are these chemicals hidden in products we use every day? The fact that these “trade secrets” protect companies from their competitors or that no regulatory agency exists to monitor these ingredients is really no excuse. Why does government look the other way? Basically, they’re in bed with business.

Though much of the information presented in Stink! is disheartening, the documentary itself is thoughtful, thought-provoking, and highly watchable. Jon Whelan is a single father who lost his wife to cancer, and his everyman status keeps the documentary grounded. His interest in exposing the truth about chemicals in our products and the loopholes that allow the chemical industry to go unregulated is the same as any consumer. If big business can slip carcinogens into our homes with a word as benign as “fragrance”, then we have a right to know about this Stink!. The documentary offers no easy answers, but certainly empowers viewers to rethink their exposure to mystery chemicals and seek natural alternatives.