Bring your snuggie and a warm cuppa (not to mention a barf bag for violence), because this is one c-c-c-cold movie.
By Lindaon July 12, 2016
0 Comments
Our Rating 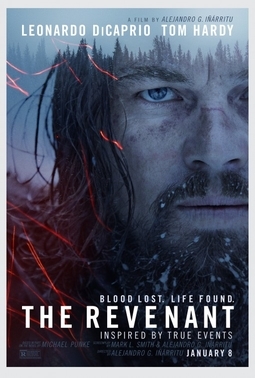 The Revenant (which I know from seeing the excellent, unrelated French series Les Revenants) means one who has returned from the dead. Though this is not really explained in this brutal film by Alejandro G. Iñárritu (perhaps, at some point, one of the French trappers muttered something I missed?), you can pretty much get the gist after watching this over-two-hour montage of the many many ways in which one can try to kill Leonardo DiCaprio. It is grueling in more ways than one.

In the early 19th century, mountain man guide Hugh Glass (DiCaprio) is leading a ragtag group of trappers and soldiers back to their fort after their encampment is bloodily raided by local tribe of Indians. With dozens of their group left for dead as they hastily flee arrows, hatchets, and scalpings, its up to Leo/Glass to lead the men on foot back to safety through the snowy, treacherous wilderness. But! While out scouting, Leo stumbles upon some bear cubs, turns around in surprise, and mama bear rips his head off. It is now Leo’s turn to be left for dead by mumbly, vengeful Tom Hardy and his naive cohort Will Poulter, who promise their leader that they’ll stay behind and give Leo a decent burial. Instead, Tom Hardy throws Leo and his head into a grave, throws dirt on him, calls it good, and takes off after the rest of the party.

If Leo’s dismembered, grunting, frothy-mouthed head wasn’t pissed enough about being decapitated, he is pissed at Tom Hardy for killing his half-Indian son in front of his own angrily blinking eyes. Next thing you know, Leo’s lurching body, with his own head tucked under his armpit, is staggering across the wilderness for revenge. Revenge! Not on the bear, but on Tom Hardy!

OK, I changed some plot lines here a little bit, but not a lot. You get the idea. Some people want to see Leo get his long-overdue Oscar for getting his head ripped off by a bear and surviving, but seriously, if he does get it, it will be for two hours of grunting, looking miserably cold, getting tossed off a waterfall, and pulling a Tauntaun maneuver on a dead horse. When you see Leo’s breath actually steam up the lens of the camera, it just reinforces what you as a viewer figured out already… Iñárritu pretty much tortured Leo for the sake of awards season.

But it is art!

I will not deny that The Revenant is a gorgeous movie. It is like the worst, most beautiful commercial about why you should NOT go camping in the wilderness in the winter. You, too, can feel tortured in almost what seems like real time as a man suffers and suffers and suffers. The Passion of the DiCaprio certainly isn’t for all tastes, just those who have a taste for raw meat and blood.