The Tudors: The Complete First Season 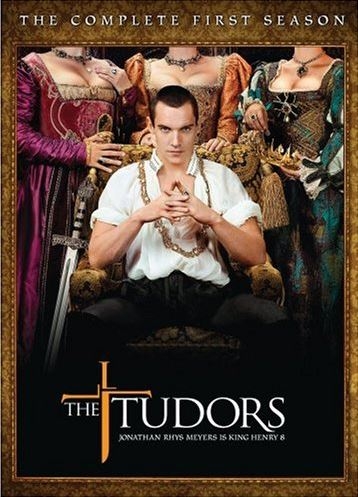 It seemed like a curious coincidence that I started watching The Tudors shortly after I had finally rented Sofia Coppola’s candy-concocted Marie Antoinette, and a mere couple days after seeing a theatrical trailer for upcoming The Other Boleyn Girl starring easy-on-the-eyes Scarlett Johansson, Natalie Portman, and Eric Bana. I tell ya, history is getting sexy again! Why should historical figures look like their stuffy, pale portraits when in real-life they may have looked like hunky or beautiful movie stars?

In real life, Henry VIII (or “Henry 8” as the DVD’s packaging dubs him) has been immortalized as a huge, multiple-chinned bear of a man in his famous later-in-life portrait. But The Tudors is all about portraying him in his virile, fit, youthful era, as the young, lusty, and tempestuous King of England. In The Tudors, the King is played by Jonathan Rhys Meyers, who portrays Henry as a temper tantrum throwing, power-hungry young lord who surrounds himself with corrupt henchmen and advisors, including scheming Cardinal Wolsey (played by Sam Neill) and saintly Sir Thomas More (Jeremy Northam).

If corruption and scheming weren’t enough (and there sure is a lot of it to cover), The Tudors also gives plenty of attention to showing lots and lots of sex. In the first episode alone, I counted four soft-porny sex scenes—and I believe with no same combination of people is shown twice (most pairs, of course, involve at least Henry though). In the carnal department, The Tudors picks up when Henry VIII is introduced to the Boleyn girls, who are pimped out by their father Thomas Boleyn (Nick Dunning), ambassador to France, who pushes his daughters—first Mary then Anne (Natalie Dormer)—into Henry’s bedchambers. This is no mere love match, of course, as Mr. Boleyn has his own power-plays in mind if he can get the attention of the King via one or both of his daughters. In the meantime, Henry’s own wife and queen, Catherine of Aragon (Maria Doyle Kennedy), is forlorn because she has been unable to bear Henry a son, and thusly is no longer number-one on her husband’s nighttime-visit list.

The Tudors is certainly a fantastic-looking show, and even though I have always found Rhys Meyers inherently creepy (just look at him giving crazy-eyes in the opening credits), he does make the sexy, power-hungry young monarch captivating. The supporting cast is top-notch—unsurprising when you’ve got Neill and Northam at your side, plus the talents of lesser-known folks like the intriguing Natalie Dormer as Anne Boleyn and Maria Doyle Kennedy as Catherine vying for attention in the court. More than once, I was distracted, also, by the gorgeous costumes, and had envy for some of the patterns and glitz on the lovely fabrics making up Henry’s outfits.

By the time the first season ends, more than one character has seen his or her rise and fall, often within an episode or two. Knowing the density of this part of history, it sometimes feels like a cheat sheet is needed to keep all the characters (and their alliances) straight. But knowing how much is covered in a single season, and having a rudimentary knowledge of King Henry VIII himself, I know that there is plenty of juicy scandal yet to come in the next season.

History buffs will love the extras on the Complete First Season DVD set, which provides several fascinating tidbits. There is an 23-minute featurette touring historic locations from the Tudor period, taking you to several sites in present-day London. A red-bus tour guide explains the significance of each site while the screen splits, showing corresponding scenes from the show for context. Watch out, though! If you are only familiar with The Tudors as a TV show, rather than as a torrid, well-known time of history, you may encounter some spoilers for several of the show’s main “characters”. There are also short featurettes about the luscious costume design, as well as the production design of the show. Costume designer Joan Bergin chose things like metallic leather to match the “rock star charisma” of young Henry, plus raided the wardrobes of old Errol Flynn movies. And production designer Tom Conroy, worked with a talented staff and limited budget to create the extraordinary look of the show in, of all places, Ireland!