Just because you’re paranoid doesn’t mean they’re not after you.
By Lindaon July 12, 2016
0 Comments
Our Rating 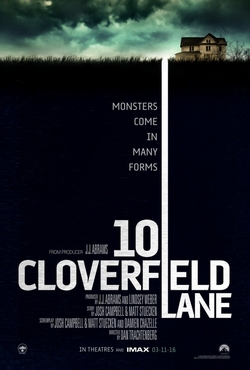 So, you know those conspiracy theorists? They’re the guys (yep, usually guys) that are quite certain that the latest (fill in the blank) enemy is going to bomb the hell out of our glorious country. Or maybe a virus is going to be released by the government to make the air toxic. Or, heck, maybe the aliens will invade and destroy humanity. Or all of the above! You gotta be ready! You have to have a plan! Better yet, a BUNKER! With SUPPLIES!

Howard (John Goodman) is one of those guys.

In the opening scenes of the film, we meet Michelle (Mary Elizabeth Winstead). Rather, we see a young woman going through the motions of running out of town. We don’t know her motives, if she is running from or to something. But we see her get in a car accident in the middle of nowhere. She wakes up in a cement bunker, her head blooded, her wounded leg shackled. Oh, hello, Howard.

Howard explains that he saved her life. There has been a horrible disaster out in the real world. Everyone is dead except him and Michelle. Oh, and a young good-ol’-boy named Emmett (John Gallagher, Jr.). Emmett has his arm in a sling. Michelle doesn’t know what is going on and thinks she has been kidnapped. Luckily Michelle is not a dame in distress, but is impressively resourceful. As she reads the situation, and the situation slowly changes, we are right there with her. Her shock as things are revealed is our shock. We only know as much as she knows at any given time, and the clues are slow to unveil.

Basically, it’s a fun, twisty mystery, verging on horror. Is Howard crazy? Goodman plays him right on the edge. He’s always had a sort of Santa Claus/big friendly giant persona, but knows how to add a touch of the sinister to his performances. Is he lying? Is he telling the truth? When you are in a homey underground bunker with no contact with the supposedly destroyed outside, how the heck can you find out what is really going on?

I will say this: The less you know about the movie going in, the more fun it is. I went in cold, and was delighted and giggling as the story unfolded. During one brief moment of silence in the story, that crazy cackle you heard in the audience was me. 10 Cloverfield Lane is an effective, twisty, and funny paranoid thriller the works the best when you are as clueless as the lead character.