This animated road-trip comedy mixes laughs with life lessons for an entertaining take on family dynamics amongst our prehistoric ancestors.
By Vickieon March 22, 2013
0 Comments
Our Rating 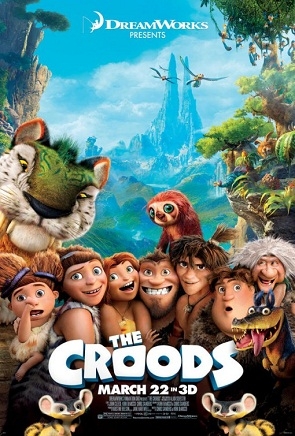 Neanderthal Grug (voiced by Nicolas Cage) is the patriarch of the titular clan and suffers from a raging case of change-phobia. Everything new is bad and scary; everything known is safe and good. His daughter, Eep (voiced by Emma Stone), has a different approach to the world at large – one of curiosity and wonder and risk-taking… which, naturally, frequently sends her panicked pop into a tailspin.

But doom-dreading dad soon has to follow his daughter’s life-loving lead when the tectonic plates shift, earthquakes and fire hit, and the entire Crood family is sent on a trek through unknown territory to find a new home. Helping them along the way is charismatic stranger Guy (voiced by Ryan Reynolds), a spirited young man who shares Eep’s passion for exploration and, thus, promptly becomes Grug’s number-two foe [after his cane-wielding, spitfire of a mother-in-law (voiced by Cloris Leachman)].

Filled with explosions of color and whimsy (alongside actual explosions of lava and rock), the story follows a fairly standard road-trip arc and blends that with the (stone-)age-old father-daughter drama that comes with “daddy’s little girl” growing up. The filmmakers also infuse some not-so-subtle morals (about being open to change, about being brave in the face of the unknown, and about the power and value of a family who loves you) into the otherwise comical capers of its beefy-torsoed characters.

Speaking of, there’s a weird juxtaposition between realism and cartoon-ery amongst the characters. The animators have clearly tried to make Eep look like Emma Stone, and to give both Eep and her mother (voiced by Catherine Keener), more human-like/realistic features. Grug, his son (voiced by Clark Duke) and his mother-in-law, though, are all wildly over-the-top cartoonish in their physicality. Not sure why, but I found it weirdly distracting – as though this family were made up of cavepeople from two different movies.

The Croods takes a while to get its footing – the first third of the film feels oddly slow and meandering – but eventually settles into a lively adventure that isn’t quite as strong as some other recent animated offerings, but is nonetheless fully entertaining for young and old. 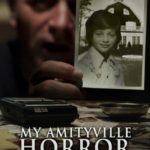 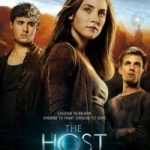