Yes, the film infamously features eyeball-searing scenes like ejaculating puppets, but I have to give credit where credit’s due: The Happytime Murders made me actually snort with laughter several times, which no other movie has done this year. 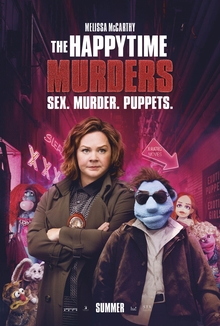 If you haven’t seen the red-band trailer for The Happytime Murders, well, just take a look below. I’ll just wait over here.

Now that you can’t un-see the ejaculating puppet, let me point out that that is the most brain-melting moment in the film. If you can handle that scene, and even find it shockingly funny, you may just be the target audience for this raunch-o-rific Muppet movie by the son of Jim Henson himself.

But if you’ve seen any Bogart movie, you know that Phil will get pulled back in to his old work, and this time it will be personal. When Phil’s brother, a 90s-puppet star of a cheesy TV show The Happytime Gang, becomes the latest cast member to be murdered (in an explosion of stuffing), it’s up to Phil to team up with Edwards to solve the case. The question is: How many jokes about puppet-sex, puppet-drugs, and general puppet-debauchery can you stuff into one pelty 90-minute plot?

Here’s the thing, I’m the first to admit that much of The Happytime Murders was very very wrong. And that some jokes (like the puppets repeatedly mistaking McCarthy for a man… har har, or the surprising about of blow job jokes) fell flat. But more often than not–and surprisingly consistently for a just-long-enough 90-minute movie–I found myself laughing. A lot. Heck. I even snorted several times, and I can’t remember the last time that happened. Shoot, a bizzare one-liner (yes, about a blow-job) by the lippy crackhead puppet Goofer had me giggling for several minutes, and for the life of me I can’t really explain why. But there you go.

Like Sausage Party trying to mate with the Muppets, The Happytime Murders is out to ruin your childhood memories. Yes, there is a good chance that Jim Henson may be rolling over in his grave at his son Brian’s take on the beloved felty characters. Or, let’s be honest: Jim may actually be laughing, too.