The Uninvited is one of those vaguely entertaining horror movies that plants the scares so that you can see them a mile away, and sets up a character as one thing only to pull the rug out from you later.
By Lindaon October 27, 2013
0 Comments
Our Rating 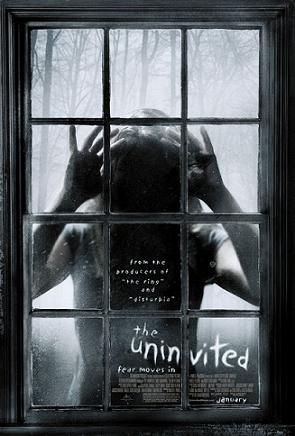 The Uninvited is a mish-mash ghost story that combines elements of The Sixth Sense with an Asian horror movie (it is based on the Korean chiller A Tale of Two Sisters) and looks like it takes place in the land of Stephen King. But when all is said and done, you are left scratching your head then shrugging your shoulders at the plot twists, rather then keeling over in shock (as I’m sure the storytellers expected you to do).

The opening scene introduces us to the nubile teen Anna (Emily Browning) as she is making out with a boy at a bonfire party. “I love you…” he says. “I have a condom.” I hope that this was supposed to be an intentionally hilarious opening to the film, and luckily for us, it is a dream sequence. Anna is plagued by nightmares of bags of body parts spilling out on the forest floor, of boat houses exploding with her sickly mother inside, and of little dead children staring solemnly at her. But the thing is, just as often as not, Anna sees these things when she is wide awake.

Is Anna nuts? Well, she is coming home finally after being under psychiatric care for almost a year. Her mother did die in a horrific explosion that blew up the boat house that she was staying in… you know, one of those beautiful little houses down the grassy lawn from the family’s huge Maine waterfront house. But Anna is sure that it was no accident that a fuel line was left dripping, which led to the explosion. Anna is sure that it was her mother’s nubile nurse Rachael (Elizabeth Banks) that offed mom so that she could get busy with the man of the house (David Strathairn).

Now that Anna is home, and Rachael has since “moved in” in more ways that one, taking on the role of the woman of the house, Anna is sure that Rachael is a psychopathic killer. It is up to Anna (and her weird visions) and her adored, sassy older sister Alex (Arielle Kebbel) to figure out if Rachael is indeed as sinister and murder-prone as she seems to be.

The Uninvited is one of those vaguely entertaining horror movies that plants the scares so that you can see them a mile away, and sets up a character as one thing only to pull the rug out from you later. The twists would be vaguely satisfying if they actually added up at the end of the film. At the final revelation, you think, “Huh!” then you think, “Wait, but what about…?” then finally, “Whatever.” The credits roll, and rather than trying to untie the mess that is the plot, you instead use your mental energy to plot your next visit to the grocery store.

The DVD of The Uninvited includes the featurette “Unlocking The Uninvited” which has not only the usual behind-the-scenes stuff, but discusses the original Korean film Tale of Two Sisters (from which the film actually has some notable digressions). There are a handful of throwaway deleted scenes, plus an alternate ending (just a very short scene) that luckily got left on the cutting room floor.