You don’t need to have spent any time in an arcade in order to enjoy this cheerful, spirited animated comedy about a villain who wants nothing more than to be a hero.
By Vickieon November 2, 2012
0 Comments
Our Rating 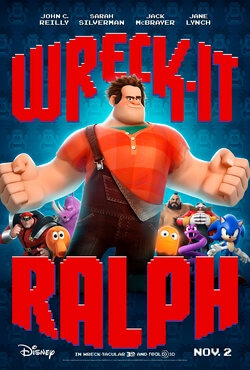 Set in the world of video games old and new, Disney’s latest offering blends nostalgia and high-energy antics to create the story of its titular oaf (voiced by John C. Reilly), a character in a classic arcade game (that bears an uncanny resemblance to Donkey Kong), who’s spent decades as the “bad guy.” The hero of his game, a spritely handyman named Fix-It Felix (voiced by 30 Rock’s Jack McBrayer), gets all the love and glory from their game’s residents… who, sadly, scorn Ralph. Determined to win them over, Ralph leaves his game and sets out to win a hero medal in a super high-tech first-person-shooter extravaganza, but his efforts wind up unleashing havoc as arcade characters start to go rogue.

Ralph, meanwhile, lands in “Sugar Rush,” a racing game set in a candy-centric world and populated by a pack of pint-sized girl racers. One of them, Vanellope (voiced by Sarah Silverman), is a “glitch” and – like Ralph – an outsider amongst her peers. Together, this odd couple try to figure out how to remedy their arcade dilemmas, win their respective games and earn the admiration and affection of their digital peers.

Filled with clever winks at gamers and their beloved “toys,” with nods to characters gone by (the entire QBert crew is on hand) and present-day (keen-eyed viewers will spot familiar-face cameos from games like Mortal Kombat, Street Fighter and Mario Kart), the film zips along at a pace that will keep young viewers engaged and parents relieved – save for a sequence exploring the world of Sugar Rush, it never really lags.

Extra-careful attention has been paid to everything from art direction to animation, right down to the wonderfully staccato movements of the Fix-It Felix folks, so that the action feels like it’s happening inside a video game while still being visually stunning. As with any film of this ilk, there are clever in-jokes and asides, and plenty of video-game fun; and, as with almost every Disney animated film, there’s also a decent amount of heart. I will admit that, for a fleeting moment, I actually found myself getting choked up. The movie contains some nice messages about change and acceptance, and being the best version of yourself you can be.

The voice cast is great, with Reilly’s lovable lout the perfect partner for Silverman’s sparkplug. Jane Lynch delivers a no-nonsense supporting performance as a sexy, gun-toting badass for whom Felix falls hard, and folks like Mindy Kaling, Ed O’Neill and perennial favorite Edie McClurg turn up in bit parts.

Though it isn’t the most amazing animated offering Disney’s put forth, and it does follow a fairly straightforward blueprint, Wreck-It Ralph is nonetheless a good time at the movies for the whole family. 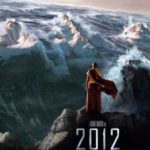 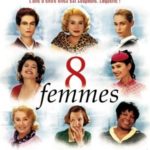