I’m going to hell for saying this, but Abe Lincoln was the least interesting character in the movie that bears his name. 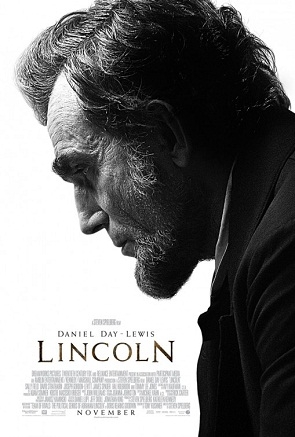 You need get no further than the opening scene in Lincoln to see a Spielbergism. Abe Lincoln sits on a throne of a chair, on a platform at a battlefield, not-subtly evoking the pose of the famous statue at the Lincoln Memorial in Washington, DC. Two sets of soldiers come up to Lincoln, the first pair black, the second pair white. The young African-American men are as in awe of their President as the white boys, who almost fall all over each other like puppies to impress the man. But the young black men raise some tough questions of their President. What will happen to them, as free black men, when the war ends, and what will happen to the slaves? As the soldiers are called back to duty, they walk off in their separate directions, proudly reciting Lincoln’s own recently-delivered Gettysburg Address.

Just as you are left to ponder that scene, there is suddenly a super-weird dream sequence where Abe Lincoln looks like he is riding a speeding magic carpet while looking off into the unknown! I’m not even kidding.

Now, back to the moment with the soldiers. That scene sets the stage for the plot of the film, which surprisingly, takes place over a very concentrated point in time—only a month, really—when the Civil War was limping to an end, and Lincoln was rushing to pass the 13th Amendment to ban slavery. Lincoln knows that if the war ends, and the Southern states rejoin the Union, the amendment would never pass. So he hires some back-alley lobbyists (James Spader, John Hawkes, and Tim Blake Nelson, who are all a hoot) to try to urge the more hesitant congressman to vote for the Amendment. In the meantime, a delegation from the South is waiting at an undisclosed location, wanting to negotiate the end of the war. The clock is ticking. How long can the Southerners be stalled? How many more congressman can be turned to get just the amount of votes needed to pass?

All of this is actually quite interesting. In fact, it is more interesting than Lincoln himself. I marveled at how perfect Jackie Earle Haley looked as the main Confederate negotiator Alexander Stephens. Tommy Lee Jones plays Tommy Lee Jones… I mean Thaddeus Stevens in a notably terrible wig. Stevens is the most adamant abolitionist of the House, and has opinions (and wit) enough to cause an uproar on the floor whenever he opens his mouth. We meet several of the representatives, especially when it gets down to the wire. Will any of them flip-flop? If so, which ones? It’s not like we don’t know how the vote ended, but still there is a fun amount of tension during these scenes.

But, oh yeah, the movie is called Lincoln. What about that guy? To tell you the truth, I felt that the movie screeched to a halt whenever it focused specifically on him. It is hard to fault Daniel Day-Lewis, who inarguably one of the greatest actors working today. His Abe Lincoln is a sort of lanky, kindly uncle, who likes to dodder around the White House with a blanket over his shoulders and tell rambling, homey anecdotes to anyone who is within earshot. It is almost like Spielberg is so reverent of Lincoln as a character, that he sucks out any edge to the man, making him a dull saint at the center of the story. Sally Field, as Abe’s wife Mary Todd, makes the most of a couple of withering, wounded moments that may as well have “Oscar-nomination!” flashing over her head. Even Joseph Gordon-Levitt’s brief appearance as their son Robert Todd Lincoln makes a more resounding impression, as a young man who insists on enlisting before the end of the war so he won’t be wracked with guilt.

Lincoln starts slowly (lulling at least two people in my row into short naps), and finally picks up when all of these well-cast peripheral players are thrown into the mix. The movie slowly builds towards the resounding climax that could have, and should have ended the movie. But we all know that Steven Spielberg hasn’t been the best closer since A.I. Artificial Intelligence, and he fumbles here again. Just when the natural ending of the film ends, the film keeps going. The last few minutes of this film were completely unnecessary and should have been added with a postscript (that everyone knows already). But that would be too subtle, and we all know that subtlety is not Spielberg’s forte.

There are a multitude of interesting behind the scenes extras on the Blu-ray release, including “The Journey to Lincoln”, “A Historic Tapestry: Richmond, Virginia”, “In the Company of Character”, “Crafting the Past”, “Living With Lincoln”, and “In Lincoln’s Footsteps”. All aspects emphasize the reverence that the entire cast and crew had for the subject of Abraham Lincoln. Cast members stayed in character (and were always addressed as such) on set, with no modern small talk in between takes. Every little bit and piece, from the wallpaper in the background, to the color of Mrs. Lincoln’s dresses, to the random piles of letters on Lincoln’s desk, were always presented with as much authenticity as possible. Pretty impressive!