As the series continues to limp along, you can at least argue that the third installment would make an excellent drinking game.
By Lindaon July 12, 2016
0 Comments
Our Rating 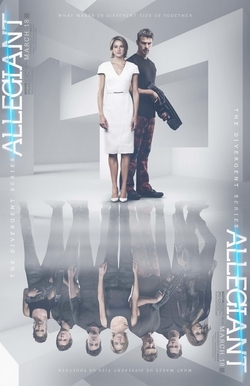 As the third installment in the Divergent series opens, you’d think we stumbled across a Trump rally. Now that wicked leader Jeanine is dead (oh, how I miss you, Kate Winslet!), the factionless leader Evelyn (Naomi Watts) has now taken control. This new society, ignoring the assigned factions, basically has Chicago in chaos, where a trial usually ends with mob bloodlust and a shot to the head.

Tris (Shailene Woodley) and Four (Theo James) are pretty sure they could do better. In fact, maybe there is someone else out there, beyond the wall, that IS doing better, and they need to find out. Along with a few of their buddies, some moxie, and wire cutters, they make it over the barrier around the city, and stumble into Maze Runner: The Scorch Trials. I know, that is a bit unfair, but I swear, I *just* saw a handful of attractive young people make their way across an unhospitable landscape, except this one just happens to have rivers of blood and a bit of a toxic glow.

Lucky for all involved, there is an invisible wall just beyond over there. The group is picked up by people in cool red camo, and find that there ARE others. There is a modern, self-sustained city run by a man named David (Jeff Daniels), and boy are they all happy to see the five-some! Tris, Four, and the others have been watched their whole lives, because the Faction society of Chicago has been one big experiment on humanity! And Tris has basically won! Or proven a point! Or something.

It doesn’t take a 25-year-old writing a YA dystopian novel to sense that Jeff Daniels and crew may not be the nice folks that they seem. Tris and Four just have to figure out what the heck is going on, while looking good in white sleeveless tops (her) and tight black t-shirts (him). Oh, and you get to see each of them take at least one shower, where strangely their hair does not get wet.

Allegiant spins its wheels while poaching from other movies in the genre, and almost forgetting the heft of the assigned-faction society from its previous two movies. Four is supposed to have relationship issues with his mom Eveyln, but the weird thing is, Theo James has more sexual chemistry with Naomi Watts (his mom) than he does with Woodley (his lover). There are a few weird plot points that had the audience giggling (for instance, Tris struggles to fly an escape pod, but hands it over to passenger Caleb, who effortlessly drives off; there is really cool holographic technology, but vehicles have seatbelts that look like they were from my old 1980s Civic). This is also the kind of movie where guns are blazing, bodies fall left and right, and the second the coast seems to be clear, Tris and Four slowly make out while their friend is awkwardly standing there with a machine gun.

But the best part is how often the word “Chicago” is uttered. Not for one second are you in doubt where this dystopian story is taking place. Don’t bother looking for landmarks or remnants of famous places, because Chicago is mentioned in every… single… scene; sometimes (I’m really not making this up), every sentence. If you made a drinking game where everyone had to take a shot for every “Chicago” spoken, the whole party would be under the table after a few scenes. It would be OK though, because then you could just snooze through the rest.