I love movies about smart people doing smart things that I don’t know how to do.
By Vickieon February 8, 2014
0 Comments
Our Rating 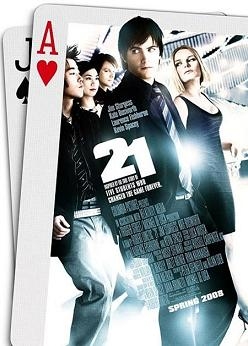 Con men,  expert thieves, scientific geniuses, whatever. If they’re able to somehow outsmart a system, I’m in. So the prospect of watching a movie about a bunch of college kids counting cards at blackjack and taking Vegas for millions seemed right up my alley. Even better, it was based on a true story! Cool.

Unfortunately, what starts out with such promise winds up faltering halfway through and then just kind of petering out, and at no point is the actual process of card counting explained. Dammit! But there are some interesting, fun moments along the way.

Loosely based on Ben Mezrich’s book, Bringing Down the House (which details the true story of six MIT students who devise a brilliant card-counting system and then hire themselves out to clients to win big), the film is obviously embellished for dramatic effect, and the biggest embellishment comes in the form of one Mr. Kevin “Scenery is My Chew Toy!” Spacey, who co-stars as Micky Rosa, a professor who recruits his top students for the blackjack club.

Jim Sturgess, most recently of Across the Universe and The Other Boleyn Girl, is Ben Campbell, a schlumpy geek with a razor-sharp mind and zero social skills. He’s beyond smart, and Micky wastes no time luring him to the most lucrative extra-curricular activity around. Along with four other students – comely Jill (Kate Bosworth), kleptomaniac Choi (Disturbia’s Aaron Yoo), hot-shot Fisher (Jacob Pitts) and nondescript Kianna (Liza Lapira) – Ben learns the tools of their trade: code words, hand signals, and how to “keep the count.” All valuable information for the group’s weekend field trips to Sin City, where they roll high, cash out and leave town before the casinos’ “loss management” expert Cole Williams (Laurence Fishburne) catches on to their scheme and lays on the hurt. Before you can blink, Ben goes from zero to slick hero, with a wardrobe to match and Jill proudly on his arm. But, like anything that seems too good to be true, this “business” is not without its risks, as Ben and his new friends soon realize.

While all this is going on, Micky pops in and out of the proceedings to provide guidance, encouragement, thinly veiled threats and all-out bombastic grandstanding that’s trademark Spacey at his smarmiest. Even though a few of his line readings were so over-the-top that they made me giggle, he was a welcome presence amid the bright lights in the big city.

Problem is, the action all hinges on Ben and his motivations, which are consistently weak at best. He embarks on this morally questionable journey because he needs $300K for Harvard med school, but his desire never feels real or all-consuming enough to turn a good kid into a card shark. It seems more like he does it to get closer to Jill. Similarly, the moment of epiphany where he realizes the “dire” price of his new-found hobby seems equally unconvincing. His nerdy friends are sad? That’s it? For a character to pull a 180, there has to be some kind of serious cost involved, but instead it comes off as a mild crisis of conscience that a couple of beers at the local pub could easily remedy.

As Ben, Sturgess is fine. He’s fittingly nebbish when he needs to be, vulnerable when he has to be, and cocky when the situation calls for it. But he’s no match for Spacey onscreen (or Fishburne, for that matter, who’s equally overwhelming and fun), and the same could be said for his young co-stars…half of whom have nearly no dialogue or character development. Ben’s romance with Jill is okay, but nothing exceptional, and I would have happily bid it adieu if it meant a little more Choi, whom I very much enjoyed.

Director Robert Luketic, best known for comedies like Monster-in-Law and Legally Blonde, does his best to infuse the action with a hip, bass-heavy dance soundtrack and stylized camerawork. It’s good for a while, but it – and the rather beefy running time of more than two hours – became tiresome after a while. Much is made of the group’s secret system, but its intricacies are never explained (presumably to avoid copycats adopting it and hitting Atlantic City), save for countless shots of people crossing their arms or flash cards reminding us that “sweet” is the code word for a count of “16.” We get it. The words are numbers and the numbers are words…but HOW do they do what they do?! That’s where the movie is, not in some half-hearted love story or watching Kevin Spacey do wind sprints in some cheesy disguise.

I liked 21 overall, but it lacks a little of the insider’s edge I look for in a movie like this. To borrow from the film, it’s close but not entirely a winner, winner, chicken dinner.