A Bad Moms Christmas came and went so fast that you were lucky you caught it in theaters by Turkey Day. When a holiday movie doesn’t even have the legs (or limbs?) to crawl to the finish line of Christmas itself, it is not a good sign.
By Lindaon February 6, 2018
0 Comments
Our Rating 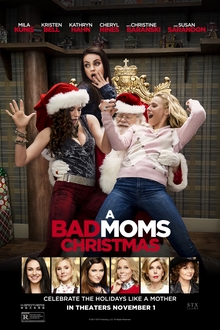 In Bad Moms, we met 30-something moms Amy (Mila Kunis), Kiki (Kristen Bell), and Carla (Kathryn Hahn) as they bonded (and drank and partied) over the stress and expectations of being a perfect mom in the modern world. Tapping into the rage against societal pressure, Bad Moms had some inspired moments, including a scene involving a pink sweater that had me guffawing. Tapping into the potential bank of raunchy humor for women, it was only natural that the film spawned a sequel… and what is more stressful to a mom than Christmas?

When the moms decide to “take back Christmas” and have a simple, low-key season, the tables are suddenly turned when their own mothers all show up unexpectedly for the holidays. Amy’s mom Ruth (Christine Baranski) is a hyper-critical snob, Kiki’s mom Sandy (Cheryl Hines) is an overly-interested BFF-type, and Carla’s mom Isis (Susan Sarandon, an inspired choice) was the party girl that was so bad that she was simply absent from her daughter’s life.

The cast is game and everyone seems to be having some fun despite a not particularly memorable script. There are hijinks involving waxing male genitals, grinding drunkenly on Santa’s lap, stealing a fully-decorated Christmas tree from Foot Locker at the mall, and competitive caroling. If you’ve always longed to hear Kenny G curse, A Bad Moms Christmas also offers that odd treat (?).

But this time around, no guffawing was to be had on my part, maybe an occasional smile, but nary an audible chuckle. By the sheer fact of being an adult female with a sense of humor, I should be (partially at least, for having a mom) the target audience for this. But the thing is, all the women I know are actually funnier than anything portrayed in these movies. With a better screenwriter and more inspired direction, this franchise may still have potential.

The scant extras include the usual additional scenes, a gag reel, trailers, and a music video featuring the crew. 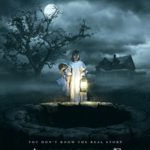 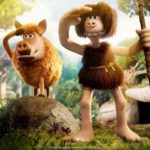