Gorgeous to look at but choppy to sit through, director Julie Taymor’s big-screen musical set to the Beatles library starts off strong and then kind of trips its way – literally and figuratively – to a moderately satisfying, but mildly anticlimactic conclusion.
By Pie Pal Vickieon September 1, 2007
0 Comments
Our Rating 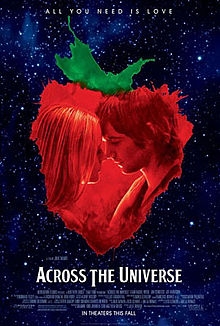 The story, set in the USA in the 1960s, centers on a trio of friends: Liverpudlian immigrant Jude (Jim Sturgess), girlfriend Lucy (Evan Rachel Wood), and Lucy’s rebellious older brother, Max (Joe Anderson). With a soundtrack featuring many of the Fab Four’s greatest hits, the film tracks our heroes through a series of vignettes about the era’s sex, drugs and rock & roll…along with liberal doses of hippie chic and draft-dodging anti-war sentiment. Orbiting the core characters are assorted artist types, including Janis Joplin-esque den mother Sadie (Dana Fuchs, in what is easily one of the strongest breakout performances of the year), guitar player JoJo (Martin Luther) and young lesbian Prudence (T.V. Carpio), who doesn’t have much of a purpose except to the be the token depressed gay girl…who vanishes halfway through the film.

Moving from set piece to set piece, the film is always spectacularly art directed. Colors explode off the screen and it’s obvious that a huge amount of time was spent choreographing the dance numbers and orchestrating, you know, all the giant puppets. But all that pomp and circumstance and beloved music doesn’t hide the fact that the actual storytelling is a little weak.

The film gets off to a good start – Jude leaves England and heads to America, settles in at an Ivy League school and falls in love. All good. Fun, interesting characters with a purpose. But midway through the movie, everything seems to unravel once U2 frontman Bono appears onscreen as a hippie, trippy guru. The action screeches to a halt for what feels like forever as all the characters (and everyone in the audience) are forced to take part in an extended acid trip that takes way, way too long and doesn’t seem to serve the story after about minute two. By the time the brain fog lifts, the momentum is lost and even Salma Hayek – in a dream-sequence cameo as a nurse – can’t bring back the oomph of that first 45 minutes.

The movie is also rather long…though, that’s to be expected given the wealth of musical material from which to choose. The actors are all fine, though Sturgess outshines his co-stars and, as mentioned, Fuchs blows EVERYBODY else right off the screen. (I was shocked to learn that this was her first film, like, ever.) In addition to Bono and Hayek, other celebrity cameos include Joe Cocker (?!) in multiple roles early on, and Eddie Izzard as the ringleader (literally) of Bono’s freaky-ass circus of the mind.

A lot of people have been trashing Across the Universe for perceived blasphemy in using Beatles tunes in this way. I dunno, I didn’t mind at all and actually thought the music was the least problematic part of the whole thing. A tighter middle section and a clearer narrative would have done wonders, in my opinion, and would have elevated the movie from “okay” to “great.”