By now he’s dealing with middle-age spread and his hair looks kind of suspicious…like maybe it might possibly be a wig or something.
By Jenniferon October 27, 2016
0 Comments
Our Rating 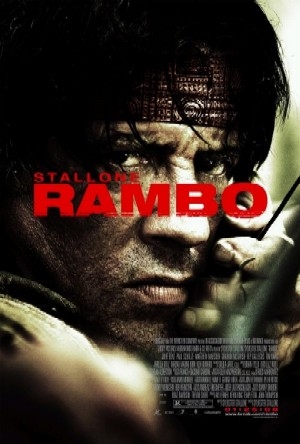 Okay, it wasn’t fine. It wasn’t fine at all. It made me mad. And I know it got decent reviews and was less crappy than anyone dreamed, but Sly TOTALLY missed the mark with this one. It’s the Rocky V of the Rambo saga, and now he owes us one more, damn it!

It’s been twenty years since we last heard from John Rambo (Stallone), and in that time, you would think he might have made some progress. Maybe he would have returned to the United States and attempted to reclaim his place in society. Maybe he would have settled down in some remote corner of the world and started a family. No matter what path he chose, John Rambo seemed to be on the road to personal peace and recovery. First Blood found him broken and displaced, but in Rambo: First Blood Part II he managed to fall in love, and in Rambo III he made friends with a little boy, rescued Colonel Trautman, and showed signs of having come to terms with his past.

Apparently all of that was lost in the twenty intervening years, because when we meet up with Rambo, he’s somewhere in Thailand, making a living catching snakes and running a river boat. He’s adopted a “f**k you, f**k the world” attitude, and has reached new lows in cynicism and bitterness. No matter how tortured John Rambo was in the other movies, he always maintained a level of vulnerability and idealism. You could tell that he wished his life and the world itself could be different (i.e. better), and that’s one of the qualities that made him so compelling and relatable. That’s why I felt so freaking sorry for him as a little girl and wished I could find some way to help him. Suffice to say that the John Rambo of 2008 is not the John Rambo we remember. Consequently, it’s hard to get close.

The movie itself unfolds in three precise acts, each one coming in tidy thirty minute intervals. Act One finds Rambo escorting a group of eager missionaries to Burma against his better judgment. He maintains that the situation there cannot be changed, and upon arrival, they all witness the atrocities he expected. Innocent citizens are blown to bits by heavy artillery, and the missionaries are promptly taken hostage. All of this is shown in explicit detail because in addition to being a right-on action film, Rambo is also intended to inform us about the situation in Myanmar. It’s a noble pursuit, but one that takes a backseat to, “Hey wow, look at Rambo go!” and “OMG did that guy’s intestine just fly out?!”

During Act 2, Rambo accompanies a group of mercenaries to rescue the missionaries, and by Act 3, they’ve been handily located. All of this could have been condensed into the first half hour so that we could move on to weightier matters, but instead, Stallone simply pulls the plug. The film is 99% action-driven, and gives little insight into the title character’s inner life. This wasn’t so bad twenty years ago when Rambo was 100% hot, but by now he’s dealing with middle-age spread and his hair looks kind of suspicious…like maybe it might possibly be a wig or something. The time to go the more introspective route of Rocky Balboa is now.

Early in the film the most determined missionary (played by Julie Benz) asks Rambo if he has any family, and for the first time, our hero reveals that he might still have a father living in Arizona. The final scene shows Rambo pausing at a mailbox marked R. Rambo, then walking up a long, winding road, presumably toward his father’s home. He’s got his pack slung over one shoulder, and from the back, he looks for all the world like he did when he met him in First Blood. In that one shot Rambo comes full circle. Yes! This is where the story begins! What happens when Rambo stops screwing around with machine guns and bows and arrows and attempts to deal with real life? Let’s see him pick up the pieces. Let’s see him interact with people who aren’t trying to shoot him in the face. Let’s get to know the man behind the soldier. Or, you know, let’s just roll the credits and pack it in.

I can’t remember the last time the ending of a movie left me so frustrated and disappointed, but I’ve heard rumblings of a fifth Rambo movie, and all I can say is that Sylvester had better deliver. You hear me, Stallone? I know all about the time you wrote the screenplay for Rocky in three days, so I’ll be expecting a draft of Just John (or whatever the heck you decide to call number five of the Rambo series) by the end of the week. Seriously, you’re on.