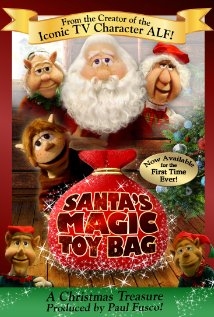 If you grew up in the 1980s, chances are you were familiar with ALF (and perhaps thought he was the funniest cat-eating alien on earth). If you’re anything like me, it’s kind of fascinating to know that ALF’s creator, Paul Fusco, also wrote, puppeteered, and voiced a series of holiday specials before the hit show was even a twinkle in his eye. Originally aired on Showtime, these specials are now available on DVD for the first time.

Santa’s Magic Toy Bag is the first in the series to make it’s way to home video, and to be perfectly honest, it’s a little derivative. I’m sorry! ALF was surly and random and came totally out of left field, so I was expecting something similar. Instead, the special and its cast of puppets simply reminded be of other (better) shows.

Storywise, Santa’s Magic Toy Bag is a lot like the Rankin and Bass version of Rudolph the Red Nosed Reindeer. Essentially we follow the story of a misfit, Sherman, an apprentice elf who can’t seem to do anything right. Though his intentions are pure, he’s constantly making weird toys (like a purple three-eyed teddy bear) or screwing up on simple tasks, like baking cookies. Consequently Sherman is moved from one job to the next several times before accidentally finding his niche. In this way, working for Santa is like working for the government.

Ultimately, Sherman’s “screw-ups” are recognized as individuality and he is embraced as the good-hearted little elf he truly is. It’s a sweet, slightly dopey journey toward acceptance punctuated by odd songs, but again, we’ve seen it before. Remember the time Hermey and Rudolph tried so hard to get Santa to like them? But this time, because we have a cast of puppets, we’re reminded of the Muppets: a low rent, less witty version of the Muppets.

As children’s specials go, this one is benign enough, but it is somewhat dated and not very compelling. Its main appeal is from a sort of television history point of view. It’s interesting to see Fusco’s evolution as a writer and puppeteer and to see the somewhat humble beginnings of a man who went on to experience major success.