Friday the 13th: The Complete Collection

Every few years you need to introduce something old and beloved to a new audience, and on that front Friday the 13th: The Complete Collection is a success. 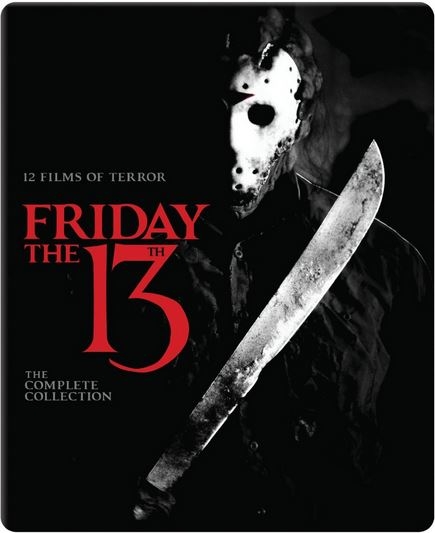 As a reviewer, it’s always weird to get a sparkly new boxed set in the mail and think to yourself, “Wowie! This thing is awesome! It comes in a tin! With stickers! And lots of movies! And extra features! I love this!” And then you start poking around on message boards where the dedicated uber fans are lamenting all of the omissions and explaining how this shiny new release is actually just a gimmicky old retread. This was my experience with the Friday the 13th: The Complete Collection, now available on Blu-ray.

I was probably twelve years old when I first saw Friday the 13th on TV, which would have made it 1989. The movie looked older than its years, but I was thrilled to finally know the story behind that notorious hockey mask. I had no idea that there were already eight movies in the series or that Jason had moved on from terrorizing campers at Crystal Lake to toppling Manhattan. Likewise, I was aware that Freddy vs. Jason existed, but I had never actually tried to watch it. Shoot, I never even knew Corey Feldman was in two of the movies. Corey f—ing Feldman! Something about this box set brought it all together for me and made me want to have a Jason marathon, and sometimes I think that’s the point of a rerelease or a boxed set. Every few years you need to introduce something old and beloved to a new audience, and on that front Friday the 13th: The Complete Collection is a success.